Edges of the Rainbow: LGBTQ communities in modern Japan 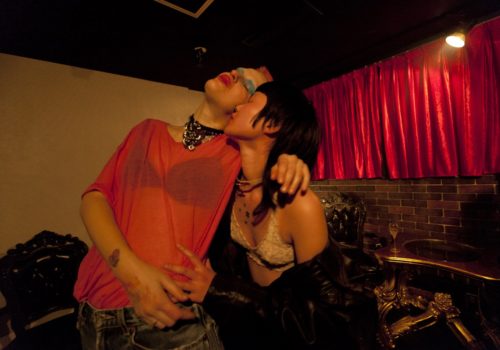 Edges of the Rainbow: LGBTQ Japan, published by The New Press is an intimate photographic glimpse into the queer world behind the closed doors of modern Japanese society. In a set of more than 150 color and black-and-white photographs, photographer Michel Delsol and journalist Haruku Shinozaki have brought together a fascinating group of individuals to create an unforgettable look at a proud and resilient community on the margins of Japanese society. Michel Delsol answered a few questions about the book.

How did you start photographing the LGBTQ community in Japan?

This book is a commission from the Arcus Foundation, whom together with the design consultancy firm Emerson Wajdowicz Studios (EWS) in New York, are producing a series of books published by The New Press on LGBTQ life in different countries, including Saint Petersburg in Russia, Mexico, Australia, and New York City during the Pride March. I specialize in portraiture and am always especially pleased when the core subject is the freedom of expression of one’s self within a limiting culture or legal framework.

How has the work been perceived in Japan?

At the start, and because the project originated from the USA, it was perceived by our subjects as an important and necessary bridge between cultures, something good for all. Once in Japan we were quite often invited by our subjects to go to their workplace, meet their families and stay overnight at their homes. During the production their commitment and belief in the project deepened, notwithstanding the fact, or perhaps because of it, that a model release had to be signed before the first click of the shutter and that they did not have the right to look at any of the photographs.
Once the book had been edited, we received the endorsement of Gon Matsunaka who produced the project Out in Japan. Most importantly, our subjects are very pleased with the book and are now actively sharing news of it on social media. As the book is just being released, it is perhaps too early yet to know its position or effect on a larger scale.

Most of your subjects live in large cities, Tokyo, Kyoto, Osaka…  what is the LGBTQ situation in more rural areas of Japan?

Keiki san is a trans man from a village of maybe 30 families, and his growing-up years were difficult because of the isolation and the conservative thinking within the community. When he was a late teen the closest internet cafe was a 45-minute car drive, so information about who he was and what he was feeling was not easily available. He was fortunate to have the understanding of his mother when he came out. He then moved to Tokyo in his early twenties and after a few years underwent hormone therapy and then sexual re-assignment surgery.

Apotheke, an electronic all male dance band, whose hit songs include SuperGays, live in a loose communal homestead in a village of less than 600 inhabitants. It is three trains away from Osaka, each train getting progressively smaller, till the last one is just one wagon, and then there is still a 20-minute car drive to their “farm”.

Apotheke originally met in Berlin, where they had gone, unknown to each other, to pursue their music. Once they returned to Japan, they decided to live in these farmers village and made it a point to interact with its inhabitants by participating in the local tea harvest (the village is poor, so most of the young people have left because there is no work), purchasing most of their goods from its only store and creating a once a year drag performance for the surrounding villages. They have a large rainbow flag attached next to the entrance of their door. On our first visit there, a neighbor came to say hello to us at their house carrying tea and cookies as a welcome gesture.

Ai Haruna is a trans women, famous pop idol and civil rights activist, and her private life is very well known to most Japanese. She invited us to an encampment of wooden barracks for the still displaced victims and survivors of the Fukushima disaster on one of her regular visits there. She offers them entertainment with songs and performances, which provides nourishment to this community of mostly aging fishermen and women. She is loved by them.

You photograph your subjects in B&W with a large format camera at the beginning of each chapter, then in colors, in a more photojournalist style. How do you articulate the two approaches and the dynamic it creates?

I wanted to have two different photographic worlds with each subject. I did one portrait with a location view camera and Polaroid type 665 negative, which I have stocked for special occasions. This photo session could take upwards of 30 minutes. I wanted this special slow intensity of the relationship between subject and photographer, as part of the process of exchange. For the other times, I worked with a Canon system, and depending on the situation I would sometimes shoot very rapidly or from the hip. These two approaches created alternating rhythms that was important for me and I think for the subjects too as we followed them for days at a time.

Japan has a great photo culture, have you been inspired by Japanese photographers for this body of work?

Myrtille Beauvert is a photo consultant. She lives and works in New York, USA.

Edges of the Rainbow: LGBTQ Japan
Published by The New Press
$21.95

An artist talk and book signing is organized at Aperture Foundation in New York on Wednesday June 14, 2017 at 6:30PM.