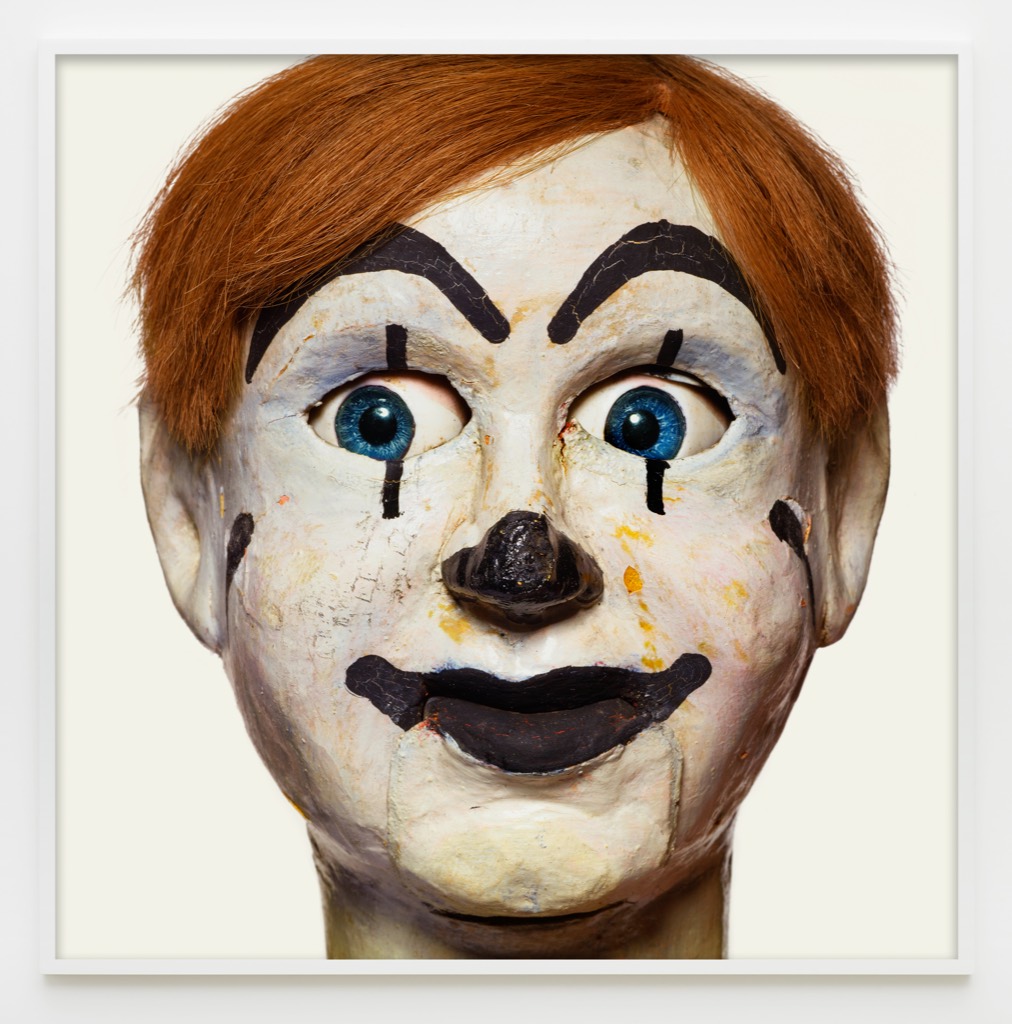 They stare at us expectantly, these dummies, as if awaiting a response. The inhabitants of the Vent Haven Museum regularly startle and impress visitors with their collective gaze. How to respond to such apparent yearning? Photographer Matthew Rolston succumbed to their silent pleas by making portraits of them. Each photograph is five feet by five feet in size, a larger-than-life square format of considerable significance. They are neither conventional vertical portraits nor horizontal still lifes but an intentional combination of both. Rolston sees these ventriloquists’ dummies as subjects, their individual personalities revealed by their hair and eye color, eyebrows, the shape of their noses and mouths, even the size of their ears.

The same characteristics that fascinate Rolston when he photographs fashion models, celebrities, and entertainers, encouraged him to make the canny decision to depict these handcrafted entertainers as though they were living beings, which is not so hard to imagine. They spent their lives on the laps of the attentive but controlling partners who brought them into being, commissioning them from specialist figure makers to have eyes that could roll with exasperation, brows that could rise with surprise, ears that could wiggle in amusement, even the seeming ability to drink or smoke, just like their nightclub audiences. Some of them traveled the world making people laugh, until they or their owners outlived their usefulness. In silent retirement, they perform no more.

In Rolston’s portraits these ventriloquial figures, as they are officially termed, look improbably alive. He was moved to reanimate them through the alchemical medium of photography. He chose his subjects, about two hundred from the Vent Haven Museum collection of more than seven hundred figures, simply because he responded to their appearance, which could be striking, exotic, or disturbing.

Certainly empathy was one reason that drove Rolston to expend time and resources in pursuit of this project. He created these pictures for one of the defining reasons used by artists throughout history: he liked the way they looked and wanted to see if he could influence how they would be seen, how they could become part of the larger visual culture. An influence in this regard is undoubtedly the estimable Irving Penn.

Penn was a legendary photographer of fashion models, statesmen, and entertainers, most often for Vogue. After thirty years in the trenches of beauty, however, he decided to assign himself the task of finding beauty in its opposite. He photographed cigarette butts and other garbage found in the gutter, and created exquisite platinum prints of generous scale. To many viewers they seemed ugly, revolting, especially in contrast to his life’s work in the glamour industry. For Penn, however, this late subject matter continued to be about abstract line, form, and rhythm in the photographic image. He seemed determined to prove that his art was the result of his talent and skill as opposed to the inherent appeal of his models.

Penn’s subsequent subjects—flotsam and jetsam from the street as well as still lifes with animal skulls—all underscored the passage of time, issues of mortality that he finally chose to pursue as an artist. His highly detailed black- and-white photograph of a smashed pack of Camel cigarettes may seem casual, but it is an exacting composition, with stray bits of matter springing outward from the center. We see a parallel in Rolston’s photograph of Art Anteak, with his bulging eyes, his nose and mouth scraped and mashed, anarchic injuries that may have come from being abandoned. The strands of hair sticking out this way and that recall the controlled chaos of Penn’s composition.

Rolston, too, has chosen subjects who are no longer beautiful or pristine, a kind of cultural detritus with little obvious value. We see in his pictures the toll taken by passing years: the flaking of painted makeup, the loss of hair, the sagging of the leather skin used around the mouth.

Rolston asked Vent Haven curator Jennifer Dawson to hold each figure in front of a white backdrop that was lit by a single hard light source. He positioned the camera to capture the glint of light in the dummies’ eyes, lending each one the appearance of being interested or attentive, as though listening instead of speaking.

Using a wide-angle lens to accentuate facial features, Rolston took each photograph from a slightly low angle to emphasize monumentality. We are virtually forced into the compositions, since many of the heads are cropped across the top, a device used to great effect by Richard Avedon and Irving Penn. These photographers were early influences on Rolston, who grew up looking at images by them in the glossy pages of his mother’s Vogue and Harper’s Bazaar magazines.

The tightly cropped face was used as well by Andy Warhol, who gave Rolston his first break, asking him to photograph Steven Spielberg for Interview magazine. Warhol remained a guiding light, and the square format of his celebrity portraits surely influenced Rolston’s choice for this work. Compare Warhol’s silkscreen portrait of Marilyn Monroe and Rolston’s photograph of Powers Girl, both with slashes of pale blue eye shadow. In acknowledgment of the iconic Warhol picture, Rolston closely cropped Powers Girl, cutting off the top of her blonde hair and eliminating her shoulders, isolating the mask of the face. The barely visible green scarf around her neck is nearly the same shade as the background of the Marilyn image. However, the goggly eyes of the dummy lend it both a comic and tragic air.

If photography has the ability to freeze life as it once was, Rolston’s work here has another purpose: to suggest life lived once more. This is a departure from the ways in which puppets, mannequins, dolls, and dummies are typically depicted. Hans Bellmer’s early-twentieth-century photographs come to mind, dismembered surrogates of female bodies that had a strong connection to the surrealist aesthetic of that time.

These dummies appear bizarre, certainly, but not surreal. Rolston has photographed them with compassion, the way a child gives a name and a personality to a doll or a stuffed animal. Rolston has tapped into a universal impulse to project our own human qualities onto inanimate figures. (Think of The Velveteen Rabbit, Pinocchio, even Toy Story.) Barnaby, for instance, with his natty striped suit, raised eyebrows, and wide sunburst eyes, has a hypnotic quality suggestive of a Hindu or Buddhist mandala, with its ability to draw a viewer into its contemplative presence. The circle-in-the-square format of this spiritual diagram is echoed by the circular head and eyes within the four equal sides of Rolston’s composition.

We recognize these creatures as familiar; we are drawn to them and their stories as we are drawn to one another, with pathos and humor. Like their human creators, they embody individual personal histories that provoke our curiosity, even our identification. Rolston is not the first photographer to document these dummies: Artist Laurie Simmons took photographs at the Vent Haven Museum in the late 1980s, though Rolston was unaware of them until after his own project had been completed. Simmons called her series Talking Objects and posed the dummies as curiosities in context, objects within a still life. By contrast, Rolston sees them as subjects, not objects. That crucial distinction informs his decision to use a radically simplified format. The identical frontal pose, without background or props, insists on their status as portraits of individuals. We cannot escape their eyes. In these extraordinary photographs they appear to us as entertainers brought out of retirement for one last show. We imagine their pride and elation as they face a new audience.

Hunter Drohojowska-Philp is an art critic based in Los Angeles.