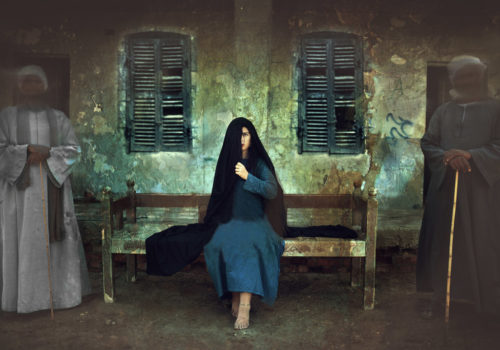 • Morocco
The Morocco exhibit presents seven works by four young female Moroccan photographers, each with a different take on what it is to be Moroccan, a migrant and a woman.

For those who speak
Firmly / Though Silently
When they rest, too early
We remember them
In remembrance of Leila Alaoui, a good friend and committed photographer who died in the hotel attack of Burkina Faso while working on a project for Amnesty International.
The exhibit of Morocco presents five works by four young female Moroccan artist photographers. Each of them has a different take on what it is to be Moroccan, a migrant and a woman.
For instance, a concern in the country is the relationship between male and female in public space. In Randa Maroufi’s series Reconstitutions we see men violently inhabiting the space of woman. Randa navigates here with mastery between real life and constructed spaces.
These fabricated spaces we see coming back in the series Inside of German-born, but of Moroccan descent, photographer Btihal Remli. In these photographs Btihal focusses on the spaces that people create when there are physically none. In The Prayer 05 a man draws a rectangular area in the sand on the beach to pray on as night fall sets in.
A work that deals with art and ritual is the series Tales of Moroccan Amazons by Moroccan photographer Zara Samiry. Zara documented the woman of Fantasia, an old traditional show celebrating the historic art of Berber-Arab warfare. This art form normally associated with men now challenges woman to compete erasing the differences between the sexes.
A series that continues the investigation of woman in spaces is Seba by young Moroccan photographer Wiame Haddad. Seba is a poetic work that shows the tension of bodies in between ages and spaces.
All the works will be juxtaposed with the presentation of the book Témoin de son époque by photographer Mohamed Maradji (born 1939) which show three generations of Moroccan kings.

• Egypt
The Photography world has been developing so fast in the last few years. New tools have enabled photographers to develop and produce endless work in different ways. I believe that every photo taken has to be an expressive piece of art, not just a click, but a complex message expressed in a frame, which comes to life through the eyes of the viewer.
Ayman Lofty

• South Africa
My curatorial proposal revolves around an extended notion of landscape. The question of the land is undeniably at the crux of South African history: expropriation, appropriation and regulation of access to cities and other areas have shaped the country both socially and politically. The current state of ambiguity is echoed by the sober iconography employed by the artists presented in this group show.
Federica Angelucci