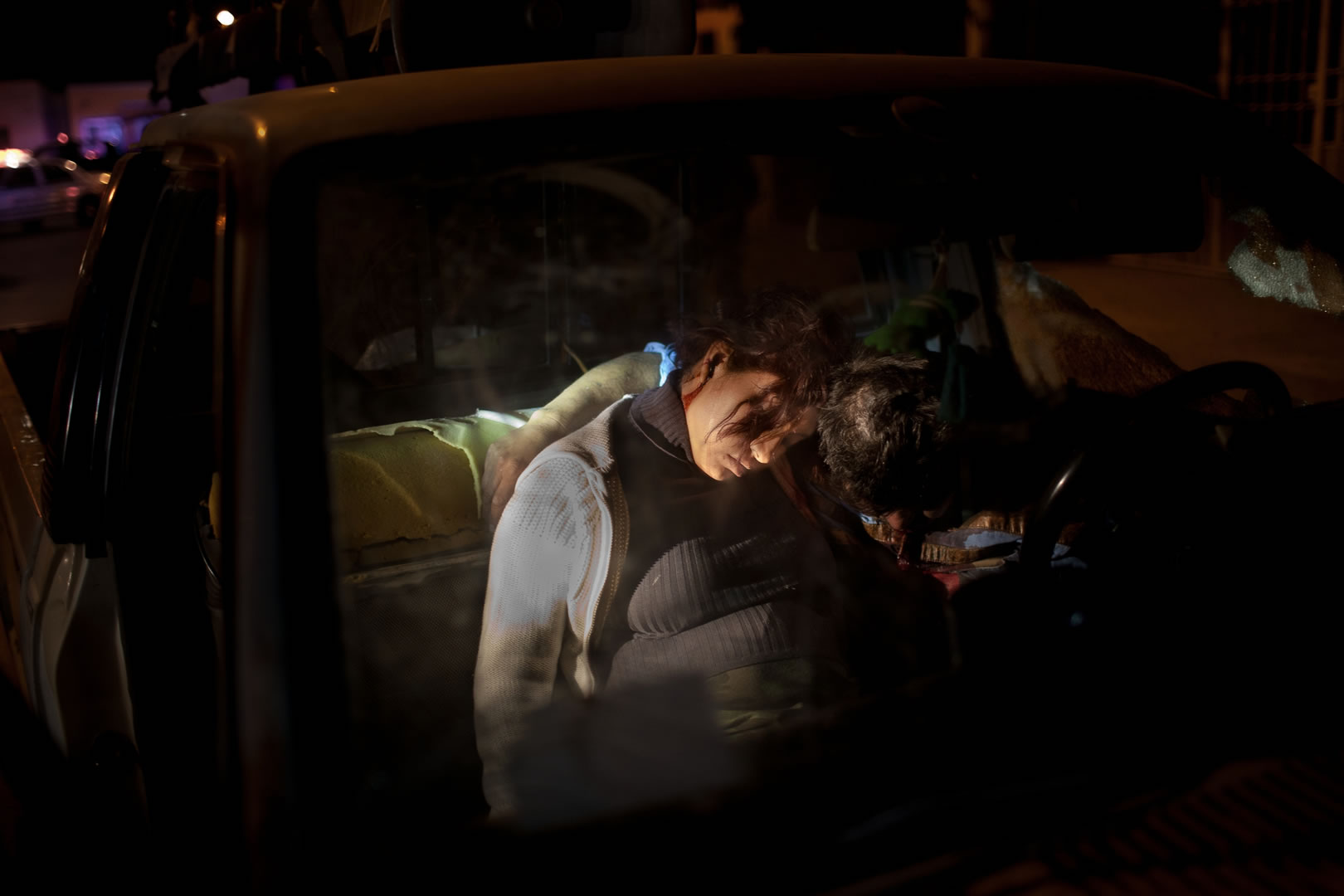 Dominic Bracco II specializes in documenting the effects of Mexican and North American policies on the border region where he was raised. He has degrees in journalism and Spanish literature from The University of Texas at Arlington. Past clients include The Wall Street Journal, The Washington Post, and The New York Times Sunday Magazine. Dominic is also a founding member of the collective Prime. He is based in Mexico City.

“There are two ways of thinking about living here; either you go on every day and when it’s your turn to die you die, or you live every day in fear.” – Daniel Gonzalez, 26, a resident of Ciudad Juarez who later moved to El Paso, Texas.

May 4, 2010 1:51 am – EMT workers Adrian and Jorge hardly stop to lower the Delilah Radio Show blaring over their two-way radios from El Paso. “What – what did they say?” Jorge responds, “Two dead by firearm.” Later Adrian and Jorge find a couple murdered minutes earlier idling in their small white pickup. The woman was far into her pregnancy. Adrian declares them dead. The couple’s heads touched in a last embrace. A single bullet entered the man’s skull and took all three lives.

Sprawled across the tail end of the Rocky Mountains where the starved Rio Bravo pushes mud through a barren desert valley sits Ciudad Juarez, one of most violent cities in the world ­– historically known as El Paso del Norte or The Northern Pass. Over the past three years over 5,000 people have lost their lives in a struggle for power thats roots reach deep into Mexico’s history. Here Mexicans are still fighting the same class war that led them into a revolution in 1911, as droves of unemployed and disillusioned youth turn to crime to move up in a society that’s class lines are firmly drawn.

Mexico’s past is filled with class-based conflicts and violence. Mexican Independence from Spain in 1810, The Caste War of the Yucatan, The Reform War, The Mexican Revolution, the Zapatista uprising, The Actael Massacre, the Tlatelolco Massacre, and finally the current conflict between cartels and the Mexican government have all been rooted, in sorts, in the frustrations of an underrepresented and impoverished underclass that lacks economic mobility and genuine political voice. Ciudad Juarez, the Mexican city that has seen the greatest amount of violence, serves as a microcosm for what is happening across the entire country. Despite a robust economy and relatively large middle and upper classes, the city has seen the drug war demolish its infrastructure (material and human) as Juarez continues falling deeper into a recessive pattern of violence, economic hardship, and social injustice. A statistic released five months ago stated that every three hours someone in Ciudad Juarez is executed. Since 2007 more than 5,000 individuals have lost their lives. The violence in Juarez is sporadic and faceless, making it difficult to pinpoint; this is the epicenter of a type of violence that is spreading across Mexico like a plague.

Without law and order the residents of the city have no faith in their government. Thousands of businesses have closed due to high extortion rates and a depressed market with aftershock from the international financial crisis. The combination of poverty, frustration, and unemployment continue; with less jobs, residents turn to crime. As a result of the violence, many individuals, families, and businesses see no future in Juarez, and flee to the United Stated or other parts of Mexico, leaving fewer opportunities for those that stay and struggle to live in the city.

In Juarez the war goes beyond the cartels and Mexican authorities, it is a conflict that involves citizens as well. It is impossible to live in the city without being effected. I make photographs of the peripherals of violence while focusing on what is happening to the average citizen of Ciudad Juarez. I spend time with factory workers, the unemployed youth and the average citizen hoping to somehow humanize the situation. I hope that my work will show a human side of a tragedy that is often ignored.