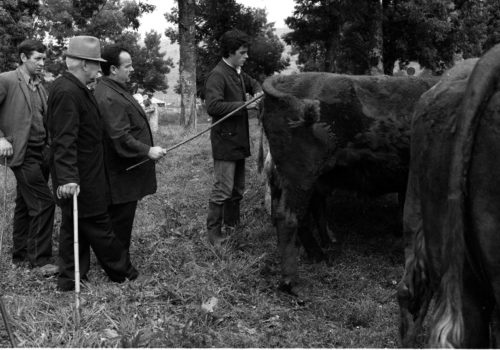 In this pandemic times, the images of healthcare workers around the world dressed from head to toe in Hazmat coveralls with mask and goggles and gloves remind me of the 1656 engraving by Paulus Fürst, used to illustrate the cover of Camus’ novel “The Plague”, the book has once again become a bestseller in 2020 due to Covid-19. We are no longer in the Middle Ages but in the year 2021, and it is according to the Chinese Zodiac, the year of the Ox, which I would rather rename the year of the Cow, because of what Denis Barrau said to me: we are living a strange time, lockdown, unlocking, curfew, re-lockdown…it is like the mad cow disease this virus and its variants, with its sneaky presence, causing infections, contact cases, distancing, compulsory mask wearing, suffering, mortality! These are odd terms whereas the cow is gentle, patient and maternal with her calf, a nurturing and docile companion of Human, she even used to share his home in the past.

Denis Barrau, the photographer who published in 2017 this book “ Rencontres d’Arles, the beginning ”, ISBN 978-2-9545987-27, quickly out of print, has just published – in a sort of quadriptych – four books, with an abundance of images of cows, and of cattle markets from the 1970s, in the heartland of deep France, transporting us to Auvergne, Aubrac, Cantal, Cézalier – Allanche and Brion, also to Saugues in Gévaudan.

These books retrace with many images a bygone era and this is a true photographic tribute that Denis dedicated to the memory of these farmer-breeders, these cattle-dealers, and a reverence addressed to the millennial relationships between humans who live off the land and their beasts. It was while leafing through these books that the idea came to me: those years evoked in Denis’ photographs were indeed “the years of the cow”. We can see the love they had for them, in this album of “vernacular” photographs we can feel this emotional charge. There is nothing belittling, on the contrary according to Clément Chéroux: they are approaching the style of the great Walker Evans!

These cows lined-up for physical inspection, the handshakes of the dealers after bargaining, these little scissors cuts to mark the ownership of their acquisitions, these hand-to-hand combat between the cowboys from Cantal with the recalcitrant animals when they struggle to park them or take them to the train, the caresses of the cow’s tits after milking, the sad faces of the men bringing home the heavy bells after having sold their beautiful animals, these close-up portraits of peasant donning Basque beret or Irish cap, with an anxious face and a concentrated gaze, Denis Barrau has collected them all, only lacking the mooing and the shouting of the auctioneers. These are the clichés of the seventies, almost half a century ago. It warms our hearts to revisit them and immerse ourselves in these black and white neorealist photographs by Denis Barrau.

Let’s put Barrau’s photographic experience in the context of current events, in the midst of countless debates on the sustainability of a planet earth which is heading towards Nine Billion mouths to feed, and the endless debates on meat consumption versus veganism (mostly in the rich part of this planet), the four books of Denis Barrau take us high up the hills, to the meadows, back to these horned animals as we hardly see them any more, those we calls “cows”, which are milked manually in the open air, at the break of dawn, and which are caressed and cared for afterwards, far from the stainless steel factories with robotic milking, far from the tedious calculations on how many tons of cereal crops to produce one kilogram of meat, while we face the millions of “poor” threatened with famine, in refugee camps or shanty towns or in the desert, because of war, ethnic cleansing, geopolitical conflicts, embargoes, overfishing of the oceans, so-called “natural” disasters which are only the consequences of climate change … But it is not up to Denis Barrau to help us solve the dilemma of humanity, he is here only to bring us this fresh air of the fresh grass smelling a little of dung, and telling us simply: remember this life.