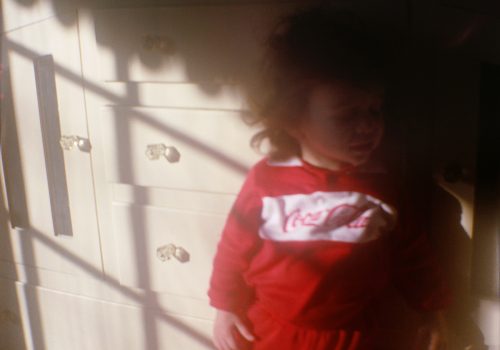 “Glauber’s work deals with the themes of raising children, of travel, of family—a specific family. Yet it is also the very common notion of loss, an ‘everyday’ loss, that we feel the most as parents, as mothers, going through the journey of raising our children, preparing them and ourselves for the day we will part and send them on their way, hopefully ready. And then be left with memories and moments.” —Elinor Carucci

For thirty years, photographer Carole Glauber pointed her Brownie Hawkeye camera at her children as they did what children do–played outside with the hose, dug in the sand, twirled a hula hoop and as time goes by have a bar mitzvah, graduate from high school, marry. Presented chronologically in the book, the two boys grow up before the viewer’s eyes. But the utilization of the Brownie year after year producing images with the camera’s signature, ephemeral look, provides a consistent emotional content overlay, even as the sons change and grow.

This is one family and their stories documented by a photographer who also happened to be a mother; yet one of photography’s great gifts as a medium is that by providing a glimpse of someone else’s narrative, the viewer is in essence borrowing bits and pieces of someone else’s story to remind and springboard into parts of one’s own narrative buried away and suddenly unearthed to the light of day.

Celebrated photographer Elinor Carucci contributed an essay for Glauber’s book, and in it she highlights this point. “As a viewer, there was a sense that I might never know some of the stories behind those images, but I might think about my own…As if I had visited someone else’s dream.”

The camera choice contributed to this “dream”-like quality in Glauber’s images. The Kodak Brownie Hawkeye box camera was developed in the late 1940s and the distinctive hazy look in the resulting photographs become a narrative aspect all its own within Glauber’s body of work. The soft focus from the uncoated one-element lens is a vintage look, suggesting a time passed, a moment distilled to a memory.

Glauber’s process in and of itself also contributes to the thematic element of time that courses through her work. By consistently chronicling moments over decades, the photographs become markers of what has passed, while also unfolding a kind of tomorrow that exists beyond the frame of the images.

“There is a universal aspect to this passage of time, to meeting the unknown, a collaboration between individuals, this complexity of perceptions, and recording of gesture,” Glauber shares.

Carucci notes the role of the Brownie look in the time-keeping aspect to Glauber’s personal storytelling methodology that also allows the photography genre to be blurred at times by hinting at family snapshot within the fine art context.

“Carole Glauber captures moments as they are stored in our brains, doing so in part with the use of a particular technique created by her choice to use a 1950s Kodak Brownie Hawkeye camera,” Carucci discusses. “Choosing this aesthetic, she walks the line between images that feel composed and intentional, and some that feel almost on the verge of vernacular photography, and so creates an authentic and intimate feeling, having the images move between private and voyeuristic, often using the aesthetic of family album and snapshot photography.”

Both of Glauber’s sons (the subjects in the images) are now grown and each contributed their thoughts on the project. When noting an image of himself on the wooden path that curved around the slope, Sam Glauber-Zimra writes, “That question is left for the viewers to answer, for the endpoint of the walkway curves away behind a nearby slope, hidden from the observer.”

The questions left to ask or answer fill in the gaps insinuated in an image or by a body of work. Involving the viewer in this way prompts connection and adds value to not only a specific body of work such as Glauber’s, but the field of photography, as a whole. When sharing her thoughts about the many years of photographing her family life and sharing the images with the world outside the walls of her home, Glauber reflects, “This involvement created innumerable paths connecting one place to the next, with many stops and starts along the way. I began to recognize a degree of contemplation in the moment, learning that in many ways we are all one.”

With essays by Elinor Carucci, Ben Glauber and Sam Glauber-Zimra

Personal History by Carole Glauber is published by Daylight Books.