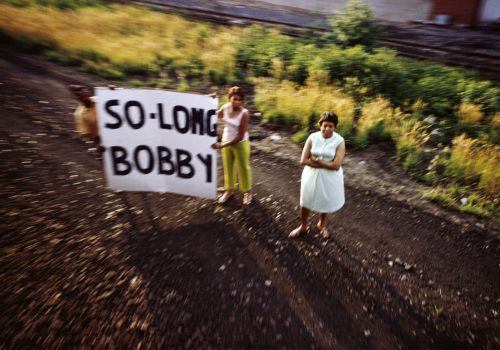 In the years since they were taken these photographs have become a beloved and influential, series in photography.  While in some ways they represent the end of the dreams of the sixties, at the same time they celebrate the idealism and diversity of America.

In the middle of 1968, two events shook the nation – the assassination of Martin Luther King and the assassination of Robert Kennedy.  Hastily arranged, Robert Kennedy’s funeral train took place on June 8th – a swelteringly hot early summer day. Paul Fusco, then a staff for LOOK Magazine, was given a place on the train. As the train made its progress from New York to Washington, where RFK was to buried at Arlington next to his brother, hundreds of thousands of mourners came out to line the railway tracks and pay their final respects.  From inside the train, Fusco began to take pictures of the mourners – people from every section of society – black, white, rich, poor, in large groups and on their own.  For the eight hours it took for the train to make the usually four-hour journey Fusco never put down his camera except to reload film shooting approximately 2,000 pictures.

The resulting images are one of the most powerful and affecting series of photographs ever taken. Shot on Kodachrome film – a film with a particularly vibrant palette favored at the time by photojournalists – Fusco’s pictures blend the spontaneous look of snapshots with artistic precision of the decisive moment. If there was ever an example of a photographer being “in the zone” Fusco’s beautifully composed frames are like arrows each hitting their target.  Each photograph carries its own weight and tells its own story, but cumulatively the series is an epic vision of America.

Because LOOK Magazine’s bi-weekly schedule caused it to come out a week after its rival LIFE the pictures were never published. Three years later, LOOK magazine folded and donated the approximately five million pictures in their archive to the Library of Congress.  Fusco had kept a hundred of his pictures but the rest were uncatalogued and lost.

Fusco’s hundred photographs would have remained an editorial footnote, were it not for a photo editor at Magnum, who showed the pictures to John Kennedy Jr. and whose GEORGE magazine published them to coincide with the 30th anniversary of the RFK’s death. The rediscovery had begun.

As director of Magnum New York in 2003 – 2004, getting to know Paul was one of the great privileges of the position. Housing the work of legendary photographers like Robert Capa and Henri Cartier-Bresson, the depth and quality of the Magnum archive is legendary. Yet nothing affected me more than Fusco’s RFK Funeral Train pictures. When I left Magnum, I was determined to find the best way to show the work and a year later I proposed creating a 20 print “master set” to Paul.

The prints were made by Esteban Mauchi at Laumont Labs in New York, who worked brilliantly and dedicatedly for the two years it took to proof and finalize the set, getting each photograph to its natural and accurate color.  In addition to the editions of individual prints, we published 10 complete sets of the 18 x 27” size of which the set we are exhibiting is the original exhibition set.

Paul Fusco was born in Massachusetts in 1930 and died in California in 2020. During his life he covered the California grape strike; the after effects of the Chernobyl nuclear disaster, the plight of destitute miners in Kentucky; Latino ghetto life in New York City; and the AIDs epidemic. His last project was covering the funerals of U.S. soldiers killed in Iraq – a body of work that was exhibited at the Aldrich Contemporary Art Museum titled “Bitter Fruit”. If ever there was a knight in shining armor wielding a camera, it was Paul Fusco.