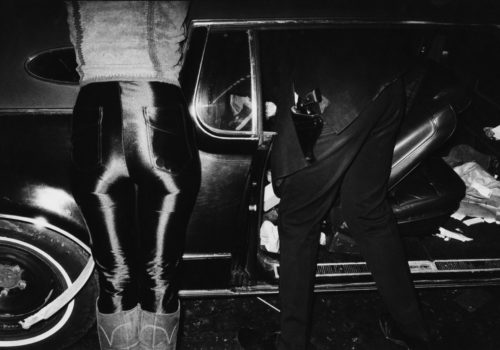 “Street Cops is about a job, being a cop.

And it’s about city life; some citizens survive it, some don’t.”

A true believer, Jill Freedman (1939-2019) was the last of a dying breed who gave her life to create art above all things, sacrificing money, fame, and status in the pursuit of beauty, honor, and truth. She died at 79 in New York City, her adopted hometown of 55 years, which she photographed throughout her singular career, amassing an unparalleled archive of street life.

A self-taught photographer inspired by the work of W. Eugene Smith and Andre Kertesz, Freedman understood the power of photography lay in human relationships. But unlike the traditional photojournalist, Freedman was not an “objective” outsider bearing witness to a foreign world; she threw herself wholeheartedly into her work, creating bonds with the people she photographed to forge a deeper emotional connection with her subjects.

Hailing from Philadelphia, Freeman graduated from the University of Pittsb1.Jrgh where she studied sociology before traveling to Israel to live on a Kibbutz. She sang cabaret in Paris and worked on a television variety show in London before moving to New York City in 1964 to work as an advertising copywriter.

In 1968, after Dr. Martin Luther King Jr. was assassinated, Freedman quit her job to join the Poor People’s Campaign on the National Mall in Washington D.C., bearing witness from start to finish of “The Last Crusade.” Equal parts artist and activist, Freedman lived inside the shantytown, making photographs that were published two years later in her first book, Old News: Resurrection City.

After a stint documenting the circus as it traveled up and down the East Coast, Freedman returned to New York with renewed vigor, recognizing history unfolding outside her front door. The city crumbled under the weight of the Nixon White House’s policy of “benign neglect”, which systematically denied government services to Black and Latino communities nationwide. As New York’s infrastructure collapsed, the middle class fled en masse to the suburbs in an exodus known as “white flight,” while landlords hired arsonists to set fire to their buildings in order to collect insurance payouts, transforming once vibrant neighborhoods into devastated landscapes.

As the city teetered along the edge of bankruptcy, New Yorkers persevered, continuously adapting themselves to ever-changing landscape with a distinctive mix of creativity and resilience. Now among her own, Freedman gravitated towards the spirit of brotherhood as it manifested among firefighters and police officers –      the city workers spending their days and nights on the frontlines of an undeclared war waged against the people by their own government.

After publishing Firehouse in 1977, Freedman began working on Street Cops, getting unfettered access to the harrowing world of crime and punishment. Like Weegee before her, Freedman had a front row view of the perpetrators and victims, bearing witness to the role police played in the fracas. Unabashedly pro­ cop, Freedman wasn’t without empathy for the alleged criminals, many of whom faced the wrath of racist policing policies.

Despite her impressive bodies of work, Freedman never achieved the acclaim of her male contemporaries during her life. Like her work, Freedman was forthright, contentious, and proud, never one to shrink herself or go along with the crowd.

Her behavior, both common and admirable in male photojournalists, was well ahead of the curve for women working in a notoriously biased industry. But Freedman was also vulnerable, sensitive, and intense, unafraid of the gory viscera of life.

“A chain smoker who liked to drink,” John Leland wrote in her New York Times obituary, “she found her stride in New York when the city was still mostly seedy, living her life and work as if she were auditioning for a role in one of her photos. A police siren, she said, meant that someone was playing her song.”

With Street Cops, Freeman set out to deglamorize violence and show the sleazy, the ugly, the tender, and the compassionate in equal measure. “Sometimes it’s better not to know too much. Sometimes it isn’t. This story wasn’t easy,” Freedman wrote in the introduction to Street Cops, which was published in 1981. “I wanted to show…. moments of gentleness, good times as well as bad. That’s why I love photography. J can catch a moment, print it, and share it with you.

Jill Freedman (1939-2019) was a highly respected New York City documentary photographer whose award-winning work is included in the permanent collections of The Museum of Modern Art, the International Center of Photography, George Eastman House, the Smithsonian American Art Museum, the New York Public Library, the Museum of Fine Arts, Houston, and the Bibliotheque Nationale, Paris, among others. Freedman is the author of seven books including Old News: Resurrection City, Circus Days, Firehouse, Street Cops; A Time That Was: Irish Moments, Jill’s Dogs, Ireland Ever, and Resurrection City 1968.