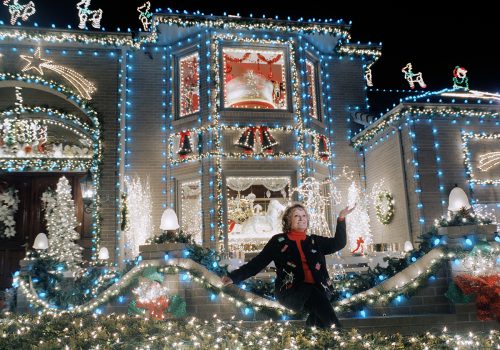 American Christmas is a new art book by photographer Danelle Manthey that examines Christmas displays, and the people behind them, through the lens of American folk art. Through portraits and interviews, the book features the stories of more than 40 families and individuals across 12 states. It includes text by Marlene Friis, a foreword from Rebecca Alban Hoffberger, Founder and Director of the American Visionary Art Museum and an introduction by MarkSloan, Curator and Chief Director of the Halsey Institute of Contemporary Art.

“I first became fascinated with Christmas displays as a child in Sioux Falls, South Dakota, where my family had a tradition of driving around town in search of houses covered in lights,” says Danelle Manthey. “Later, I realized I wasn’t as intrigued by the lights as I was by the people behind them. In my photography practice, I aim to capture my subjects in shrines of self-expression. Through this project, I reveal what makes these displays so special—the creators’ artistic vision, homespun passion and ability to share happiness.”

Over the course of a decade, Manthey photographed, interviewed and spent time with the creators of these displays, quickly coming to recognize them as folk artists. Entirely self-taught, the creators often do not view themselves as artists, yet create visceral, site-specific installations that should be recognized for their transcendent, highly skilled craft. Many of the selected displays feature region-specific motifs as well as handmade decorations. This tendency, coupled with the traditional imagery and decorative nature of the displays, situates the work as a form of contemporary American folk art.

Many of the featured individuals and families seem driven to create utopian spaces through their displays, which is a common theme among folk artists. “The truly amazing thing about these American grassroots artists, all of whom became bitten by the pine-scented Christmas bug, lies in the diversity of their motivations,” explains Rebecca Alban Hoffberger, Founder and Director of the American Visionary Art Museum. “Some had simply miserable childhood Christmas memories, so much so that they devoted their adult selves to a rectification by building some ideal Christmas Nirvana. Others were blessed with splendidly precious holiday memories, embodying emotional peaks of familial joy        All over the world, the single most common theme of visionary artists who create an artistic environment is some Edenesque Utopia, and Christmas, especially since WW1, has been at the top of the American concept of earthly paradise.”

Through the act of photographing the displays, Manthey enshrines them as a distinct art form. Where many would diminish the works as decorative cheer, Manthey looks beyond to reveal the innovation and commitment that grounds all great art. Along with making these themes accessible to a non-art audience, she succeeds in sharing the community and joy these works are founded on—something that is much needed in our current world.

Moreover, Manthey’s decision to shoot on film mirrors the creative process of her subjects. “Manthey uses a medium-format camera and film to capture these environments and their makers. This is a slow, and deliberative process, involving considerable planning, patience, and luck…The choice of using film means that the resulting images have an almost cinematic quality, as if an entire motion picture were reduced to this single, revealing frame. Manthey herself has a strong attraction to the handmade, and the unique labor-intensive works of her subjects, so it is no surprise her technique matches this aesthetic,” says Mark Sloan, Director and Chief Curator of the Halsey Institute of Contemporary Art.

Danelle Manthey is a photographer living in New York City and Upstate New York by way of South Dakota. Her work investigates the complexities of identity, with a focus on recognizing the creativity and artistry of the “Everyman.” After attending Columbia College Chicago’s photography program, Manthey embarked on American Christmas—her first large-scale project—in 2003. In 2005, she was awarded Chashama’s artist in residency program in New York, which resulted in a solo exhibition of her work and, in 2008, she began where do I start, where do I begin, a haunting series that uses a child-sized mannequin to investigate defamiliarization, identity and childhood. In 2010, American Christmas was exhibited in a solo exhibition at Jenkins Johnson Gallery in New York City. She returned to Jenkins Johnson Gallery in 2011 for a group show and in November of the same year, exhibited her series The Others—developed during her 2010 residency with Chashama—in a two-person show at Susan Eley Fine Art. Manthey has participated in multiple art fairs, including Governors Island Art Fair, PULSE Art Fair New York and Pool Art Fair New York and has exhibited in galleries across New York City; Chicago; Washington, D.C. and beyond.

The book is available for purchase here and on Amazon.