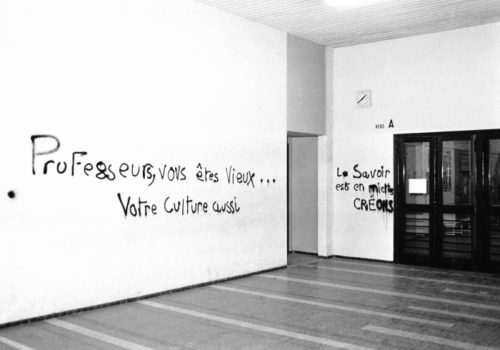 Just as we are celebrating the fiftieth anniversary of “May ’68,” Gérard-Aimé, the photographer who witnessed the first sparks of those events, died in the afternoon of May 11, 2018. He was the only photographer to have captured May 22, 1968, which established Daniel Cohn-Bendit as the student leader. He knew him and had been friends with him since 1965.

Gérard Bois, pseud. Gérard-Aimé, my friend, was born on September 18, 1943 in Livron (Drôme). The son of a Resistance fighter, conceived clandestinely as the war raged all around, joined at an early age the Young Communist League at the Lycée de Valence in order to oppose the war in Algeria.

In the last interview he granted me in June 2016, he told me, from his hospital bed, that he had witnessed a totally innocent North African being beat up in the street in Valence by two policemen from the biker unit of the Police Nationale.

In 1965, Gérard enrolled in the Faculty of Law at Paris II-Assas, which was full of “fascists.” Active in the Union des Étudiants Communistes (UEC), he was attacked by the extreme right student union GUD (Groupe Union Défense) who broke his arm and vandalized his car. He transferred to the newly established Université de Nanterre, the campus still under construction.

Like many young communists, he left the UEC to join Jeunesses Communistes Révolutionnaires (JCR), founded, among others, by Alain Krivine. At the same time, he started a photo club on campus, and began photographing the University of Nanterre and the surrounding slums.

“At Nanterre, there were no more than thirty extreme-leftists , counting all the groups.” Besides Trotskyists and a handful of Maoists, Gérard-Aimé frequented the group Rouge et Noir headed by Jean-Pierre Duteil and Daniel Cohn-Bendit. This allowed him to take the first photos of Dany the Red.

“Initially, in Nanterre, the movement wasn’t very politicized. Much of it was horseplay. Cohn-Bendit preferred soccer matches. Together with my friend Francis Zamponi, who would later become a journalist for Libération, we spent our days off at the Henri Langlois Cinémathèque, going in for the matinée and leaving at midnight.”

Late 1967, early 1968, “Nanterre had become fashionable,” recalled Gérard. “We were there when Godard whom we idolized arrived, and many others who became famous.” In March 22, 1968, Gérard-Aimé, who was freelancing for the APIS Agency, was informed by a friend that the administration tower on campus was going to be occupied.

“But that very evening, I was supposed to be at Boulogne Billancourt covering French figure-skating championships for APIS! I rushed to Nanterre only to arrive practically at the end of the occupation. I had just enough time to take ten photos without even thinking that this would be an important date.”

He kept photographing Nanterre, in particular situationists graffiti, until the center of action shifted to the Sorbonne. Gérard continued to cover all the protests and barricades. He was clubbed by the police despite his journalist’s armband…

I’ve known Gérard since we met in the early 1970s. He was working then as a professional photographer (CP 27 867), publishing in Jean Edern-Hallier’s newspaper L’Idiot International and in Jean-Jacques Brochier’s Magazine Littéraire. With two Leicas hanging around his neck, wearing a Humphrey Bogart-style trench coat, and driving a sports car (a blue Alpine Renault Tour de France), he cut a sharp, impressive figure in the eyes of a young journalist like me.

With all his gear, he would deliver his work every day to the editorial office of Simone de Beauvoir’s J’accuse, of the weekly Rouge, or Roland Castro’s Vive la Révolution (VLR), then drop by the Nouvel Obs photo department headed by Pierre Langlade, the brother of one of Gérard’s best friends, Xavier Langlade, a JCR activist, whose arrest had triggered the occupation of March 22nd.

It took Patrick Fillioud’s painstaking work, in his Le Roman Vrai de Mai 68 (Lemieux Editeur), to show how precious this visual testimony was. The Nanterre events slipped into oblivion over the next decades until this year’s commemorations finally put them into perspective.

Gérard-Aimé, who had met Horace [pseud. of Louis Grivot], another somewhat forgotten photographer of the era, had obtained some money from the Stein Foundation to start a photo lab with the intention of showing the ropes of photojournalism to extreme-left activists. At the time, it was widely believed that information would free the world!

But the enterprise was short-lived. In its wake, the interns and two photographers founded the Boojum Consort collective, borrowing its name from Lewis Carroll’s The Hunting of the Snark. The group included Jean-Pierre Pappis, now the director of the Polaris press agency in New York, Marc Sémo, a journalist at Le Monde, and yours truly.

Once again money was short. The competition between Gamma, Sygma, and Sipa, the three big photo agencies at the time, crowded out independent players.

The Boojum Consort joined forces with Agence de Presse Libération (APL) and, together with Serge July, we founded a workers’ photo production cooperative Fotolib, the first photo agency at Libération. Gérard served as its CEO from its creation in 1973 through to its closing in 1978.

He never fully recovered from what he considered to be a failure, or from the solitude that engulfed him when he deposited the key under the doormat and tried to salvage as many photos as possible, often left behind by their authors. Weary of his responsibilities, he set photography aside and worked for many years as a secretary for the newsroom of a Pantin daily, before retiring into his family home in Livron in the Drôme.

Gérard-Aimé was better loved, aimé, than ever thought. A modest, engaging man, he remained loyal to himself and to his friends, including those who had forgotten about him.

Michel Puech is a French journalist, formerly a contributor to Libération and currently to Mediapart. He has been an image specialist since 1983. He lives and works in Issy-les-Moulineaux.