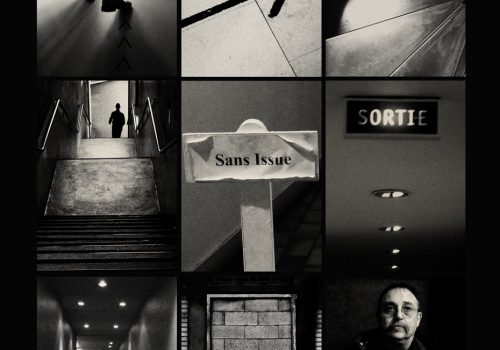 I was born in 1947 in Bucharest, Romania. Since 1993, I live in Paris. I am a self-taught photographer. The series I am presenting here is entitled “W.Y.S.I.W.Y.G. “. This English acronym means “What-You-See-Is-What-You-Get.” I could have named my pictures “Little stories of no great importance,” but “W.Y.S.I.W.Y.G. is shorter.

As I do not know what to say about my photos, I take advantage of the fact that I have a good friend who has very well understood what is my photographic approach and allowed me to share with you his point of view. I give him the floor:

«  Dan Hayon, removed from the contemporary art market and its meagre concepts, distrusts the facility of the large format, and is in no way prone to suspicion of a vulgar use of colour. Bearer of a certain ethic, true demiurge, Dan Hayon, author in the full sense of the term, is close to an alchemist, if not an apprentice sorcerer.

His matter, irreproachable, places him in the lineage of the greatest. Dan Hayon could well be satisfied with a body of work of such originality.

But uncertainty gnaws at him. It is not only a question for Dan Hayon of introducing a new aesthetic, there, at the heart of the work, where the image and the series throw doubt on the presuppositions of the photographic act. Incapable of limiting the stakes to the closed milieu of photography, Dan Hayon gambles on an alternative to « commonplace » images of the world. For him, photography is a militant gesture, a fierce determination to counter the society of the spectacle.

Fully trained in the ways of the medium, Dan Hayon, in all humility, feels obliged to take part in its necessary reconstruction. Nothing is indisputable for this unrivalled experimenter. As an apprised photographer, Dan Hayon bears witness, not to the state of the world, but to the relationship of the image with the autocratic image which is developing into a new kind of merchandise. He shows, with astounding maturity and mastery, that photography is capable of recovering its freedom, of shaking off its narcissism, its decorative aspect and its tendency to follow the herd. He knows, in particular, how to play with the machine and its potential so as to better dominate it.

Dan Hayon tests, image by image, the photographic pretence. He discredits aesthetic mystification and the falsely pictorial and cultivated heritage of the object. By banning seduction and emotion, while at the same time founding an aesthetic, Dan Hayon includes in the latter the critical possibility of the visible and its perception. The question of the restitution of the real does not necessarily call for requisition of impressions. Having known early on how to rid himself of pathos, Dan Hayon has at his disposition from now on an efficient tool, his desire for detachment.

It is for all these reasons, in the rare quest led by Dan Hayon for the visual autonomy of the viewer, that I support this demanding work, so contrary to the spirit of the times. The spectacle is not the ultimate aim of this photography, which offers to participate in the emancipation of our regard. And as a final subversive element in this complexity, in this twilight of understanding, when we grope our way forward, this liberty found anew provides us with the joy of knowing where we are and of gathering together.

Photography remains an essential gesture. Stripped of its illusions, it regains here, thanks to Dan Hayon, its wonderful capacity to create a fresh rapport between oneself and the other. »