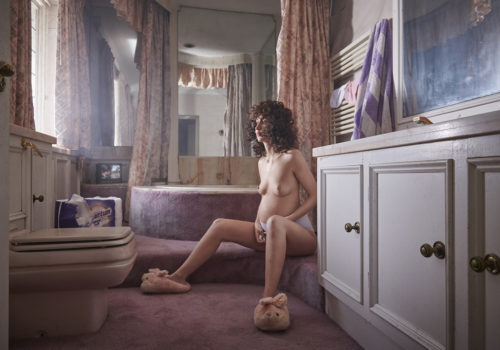 Cob Gallery recently presented Scarlett Carlos Clarke’s debut solo show, The Smell of Calpol on a Warm Summer’s Night, on view at 205 Royal College Street, London. The exhibition took place as an immersive installation consisting of a group of four tableaux, as well as sculptural and video works.

In this richly imagined articulation of all the strangeness and anxiety of our present moment, Carlos Clarke meditates on the new intensities of domesticity, motherhood and isolation. An uneasy blend of immediacy and distance – in a world that has become virtual, mediated by the numbing electric glow of phones and TV screens, and the crushing inescapability of four walls and a toddler screaming at 2am.

The madonna and child re-imagined in a suburban living room, sunk into a plush leather armchair, bathing in the blue light of advertising’s stylised plenitude and the sticky panacea of strawberry-pink paracetamol. A sense of being ‘contained’ or ‘framed’ in various ways at once – within a swelling body, an armchair or a living room – is key to Carlos Clarke’s work. The subjects of her photographs, like the visitor to the gallery space, are framed in a meticulously rendered domestic setting where comfort has become itchy, safety oppressive: a world of only interiors. Thick carpets and soft furnishings play to the sense of suffocation within our seamless ‘bubbles’, as well as the frustrating collapse of tactility suggested by that term. Glowing pixels out of shot suggest some ephemeral means of escape, even if it’s just visual an- aesthesia.

At the centre of the exhibition, Carlos Clarke’s rendition of the transcendent, exhausted mother: life-giver and energy source is figured by (The Smell of Calpol on a warm Summers Night), 2019, a hyper-real sculpture cast from her pregnant torso, which is in a state of constant lactation.

The tonality of the photographs, meanwhile, captures a screen-addict sense of impending apocalypse lurking beyond the frame, haunting this apparently most anodyne of settings with a threat of further catastrophe to come. And the ‘living’ room is where it all happens –the beach of the present, with the horizon always in view.

Scarlett Carlos Clarke was born in 1992 in London.