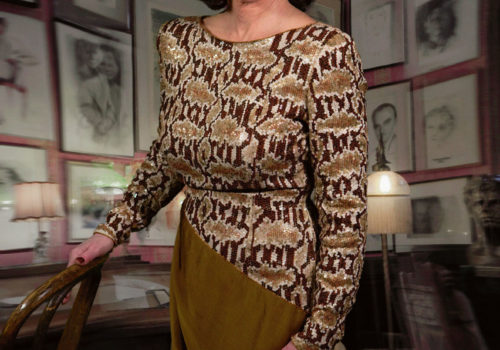 Through an array of unusual characters and settings, the American photographer Cindy Sherman has for thirty-five years offered a provocative critique of our modern visual culture. This large retrospective of her work at the MoMA is a rare honor for an artist in her fifties.

Cindy Sherman has never photographed herself. Her self-portraits are images of you and me; the faces she sees on television screens, published in magazines, and broadcast in mass on the Internet. They are us, real characters from our culture, made fictional through her photography, so that the world will take a look at itself. Through the representation of these (often female) archetypes—the career woman, the blonde bombshell, the fashion victim, the clown, the snooty socialite—she examines the construction of visual identity, the nature of representation and the artifice of photography. And always with an artist’s knack for provocation.

To create her photographs, her portraits of daily actors of our visual culture, Sherman takes on many roles: model, make-up artist, hairstylist, costume designer and, finally, photographer. Through the disguises that she conceives, with wigs, make-up, extravagant clothes and even prosthetics, Sherman has since the beginning of her career fashioned her stereotypical figures of the modern woman, above all the modern American woman.

A New Mode of Expression

It all began with her black-and-white series Untitled Film Stills, which pushed her into the spotlight 1980 and examined the stock female characters in Hollywood films of the 1950s and 60s: film noirs, B movies, European auteurs and independent films. Her fictional scenes are like stills from an imaginary film, but the characters seem somehow familiar. The protagonists that she depicts—the desperate lover, the perfect housewife, the wandering tourist—would fit perfectly into the worlds of Hitchcock and Antonioni. Her women form a sort of encyclopedia of identities with which each of us can identity. They are engraved in our cultural imagination, their images influence our way of seeing the world. Well before the proliferation of images brought on by the Internet, Cindy Sherman understood: the people are governed by the image.

In the series that followed, from Centerfolds (1981) to Fashion (1983) and History Portraits (1988-1990), modern society is again subjected to her examination. Sherman began using color and took an interest in fashion, art history and fairy tales. She worked with increasingly large formats in imitation of Renaissance painting. Her characters are seen in a variety of emotional states, from fear to melancholy, sadness and anxiety, whether in the intimacy of Centerfolds or the masquerade of Fashion. Often, their attitudes contrast with their costume and environment, seducing and repulsing the viewer in turn. They can also play with the viewer’s memory, as in History Portraits, where the references to diverse periods and styles of painting, baroque, Renaissance, rococo, seem oddly familiar but impossible to identify, so steeped is the image in parody.

One of Sherman’s most memorable characters is a clown, traditionally a figure of humor and joy, twisted into a macabre and disturbing creature, a grotesque and pathetic being that not even the carnival colors that surround him can soften. Clowns, too, can wear the kinds of pornographic accessories that Sherman places throughout her work, notably in Disasters and Sex Pictures, two series haunted by the AIDS epidemic that depict a half-animal, half-plastic human hybrid. They are one of the rare occasions where Sherman doesn’t appear in the frame, and their sexual character offers reflections on eroticism, the woman-as-object, desire and pornography. The pictures are composed, as ever, with a meticulous precision. With everything in its right place, painting, sculpture, collage and assemblage marry seamlessly and become, as if by magic, photography. Cindy Sherman is a master of space, of detail, of color and of texture.

From Studio to Stardom

Although resolutely feminist, Sherman doesn’t consider her work as such. Rather, her work is conceptual, a confluence of contemporary photography and fashion. In fact, since the beginning of the 1980s, her work has appeared in fashion magazines like Vogue and Harper’s Bazaar, and she’s shot a number of ad campaigns for fashion houses. By becoming a player in the popular culture that she so openly criticizes, she invites debate about her art, which can be interpreted in many ways. Appearing as an actress in the proper sense of the term in her photographs, changing colors as easily as a chameleon, Sherman has also acted in films like John Waters’ Pecker, as well as The Feature, directed by her ex-husband, Michel Auder. Whether in front of the film or movie camera, Sherman never stops playing the game of seduction, of suffering, of burlesque, of monstrosity. She uses masquerades to explore the social stereotypes and the fantasies they inspire. Might as well take part in it, as much as any other woman.

Despite her enormous success, Cindy Sherman is described as simple and modest, if a little emotional at times. Through the eleven rooms that MoMA has dedicated to her work, it’s possible to take measure of the position Sherman occupies in the world of postmodern photography. Last year, her photograph Untitled #96 sold for the tremendous sum of 3.89 million dollars. This historic exhibition offers a sweeping portrait of her career, retracing her precocity, influence and innovations. Cindy Sherman shouted at the top of her lungs what photography had refused to admit, wary of offending modern artists: a photograph is more than a representation of reality. It can also be a subject of debate.

FIFTY ONE : Sandro Miller & J.D. Okhai Ojeikere : My Hair, My Soul, My Freedom