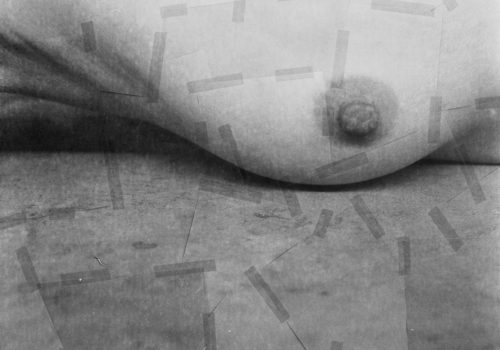 Christophe Guye Galerie presents Brigitte Lustenberger’s second solo exhibition at the gallery. The exhibition shows new works from two different series – A Gaze of One’s Own and An Apparition of Memory, which are presented in various forms, including colour and black-and-white photographs, sculptures and installations. The works all share a certain delicate quality and for a brief moment it seems as if one can stop time and preserve the beauty and fragility of life.

‘Brigitte Lustenberger’s work has always been articulated around themes such as memory, death and transitoriness, the beauty of the vanishing and of decay: universal issues deeply embedded into the experience of the human condition. She depicts and conveys them through a complex and singular visual language, primarily but not exclusively based on the photographic image.

While many of her past series contain elements from her personal life, A Gaze of One’s Own, titled in reference to Virginia Woolf’s essay A Room of One’s Own, is her first project explicitly grounded in her own experience and in which she is, as an artist, turning her gaze on her own intimacy and body. This project takes on issues linked to the artistic and cultural representations of the female body and to the reclaiming of the gaze, against the background of her own aging and changing body.

Her work has always been informed by her extensive knowledge – or rather her remarkable assimilation – of the history of photography. While it is not possible to pinpoint a single seminal influence in her work, her images effortlessly give nods to works from Man Ray, Balthasar Burkhard, Edward Weston or Francesca Woodman, to name a few. A Gaze of One’s Own is nonetheless resolutely contemporary in its approach. It retains a performative dimension that has been characteristic of significant feminist artistic practices from the 1970s onward and is equally connected to the performance of self-representation shaped by social media over the last decade, which expanded the realm of self-representation with countless tools – and the accompanying norms – to edit and reshape bodies and features.

Her project reflects on and echoes the intensity of one’s relation to one’s body in the 21st century, the need to look at it, and to craft an image of one’s own. It confronts and combines imperatives which are sometimes conflicting in this particular era: reclaiming the gaze while offering a form of self-representation. Almost over a century ago, Woolf’s argued for a literal and figurative space for female writers. At the beginning of the 21st century, Lustenberger engages in a similar process towards the emancipation of her own gaze. It is informed by, but liberated from, centuries of primarily male representations of the naked female body: ‘I photograph myself, because I cannot objectify myself.’

The transitoriness of the female body, and in particular of her own, is another central element of this work, which has brought an unexpected area of freedom. As art history has primarily been focusing on the depiction of young and conventionally beautiful bodies, the artist’s own middle-aged body is less burdened by the weight of thousands of pre-existing representations.

A Gaze of One’s Own thus addresses important issues tied to visibility, representation and the gaze, and it does so with a courageous vulnerability, both in terms of exposing one’s intimacy and personal relation with one’s body and in terms of adopting a performative and process-based project.

In parallel to this work, the exhibition presents images from a second series: An Apparition of Memory. These delicate images of half-decayed and half-preserved flowers, trapped under a mantle of lime and salt, echo the themes of A Gaze of One’s Own. Their vulnerability and the evident fleetingness of their existence elicit similar phenomena at play in the flesh visible in the photographs nearby. But most importantly, they show the inherent beauty that the artist finds in withering and decay, in the fragility of life, which she has often elected to celebrate and elevate in her photographic work.’ – Danaé Panchaud, Director/Curator of Pasquart Photoforum