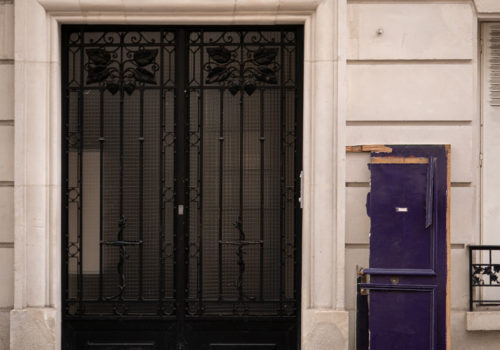 Preview
Searching for your Shadow
‘Searching for Your Shadow’ is a self-published photobook by Chris Rydlewski. From gestation to the finished photobook, it was over four years in the making, and explores identity, history, memory, and urban geography.
“My birth and adoptive parents were migrants. My birth mother from Ireland. My adoptive parents are mainland European: my father from Poland; my mother from Paris. She was also the child of migrants, similarly from Poland. She was born in France, not in Paris, but she was always from Paris.
This photobook consists of an exploration of my Parisian mother’s home district (the 15th arrondissement). This is one of the most everyday areas in Paris, with little there to attract the tourist or the sightseer. These are also the streets I walked when I was in Paris for an unanticipated week in 1967, aged 15. I spent a week wandering the streets, visiting galleries, observing, and absorbing. I did not have a camera at that time, but I now understand that that week was pivotal to my visual education. I learned to not passively look, but to actively see.
Later in life, I became a photographer.
This project is heavily influenced by the writings of Patrick Modiano (Nobel Prize for Literature, 2014), whose writings are the fragmented, lateral stories of memories, history, and the urban geography of Paris. Crucially, Modiano’s characters usually attempt, and fail, to make some sense of memories of the past. This failure is implicit in their search, as it is in mine.
The fragility of memory is thrown into relief by my mother’s struggles with dementia in the latter years of her life. This slippage of personal and familial memory greatly informed this search for the intangible.
Despite photographing in a busy city, I eschew both the inclusion of people and the visually dramatic. I prefer the spaces to remain implicit – where drama may (or may not) occur.
Hopefully this sense of latency and ambiguity in the photograph encourages the viewer to linger with the image. In my experience understanding is seldom immediate and is often cumulative”.
______
‘Searching for your Shadow’ is a limited edition of 200 signed and numbered copies. The book is hardback, 18x18cm square, containing 23 images, two maps of the 15th arrondissement, and two of my mother’s identity cards from the 1940s, as well as an Afterword by myself. There is a dedication to my mother and an epigraph of a key Modiano quote (from which the title of the book is taken).
Date published: April 2021
Price: £25.00 (28€.00) + shipping
ISBN: 978-1-80049-340-7
www.chrisrydlewski.co.uk
http://www.chrisrydlewski.co.uk/searching-for-your-shadow