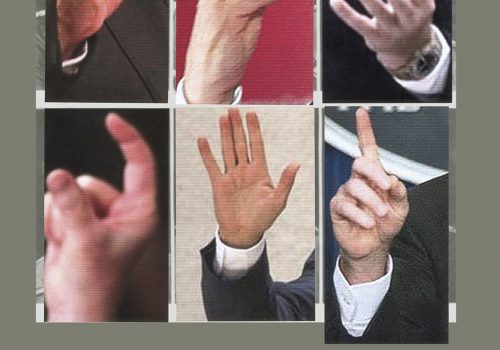 Brecht’s enforced journeying during the years of Nazi rule go some way in  explaining the context and the form of War Primer. After the Reichstag fire in 1933 he wandered from Prague to Paris, from London to Moscow; settled in Denmark; onto Finland and Leningrad and Validivostok; found refuge in Los Angeles and New York and, after the war, left the USA the day after testifying before the House of Un-American Activities Committee.

Responding to the chilling rapidity with which the Nazis were conquering Eruope, allied to the growing exactness and concentration of his poetry, Brecht developed a practice that would lead to War Primer. He began cutting out particular photographs from newspapers and magazines and then writing lapidary verse to go with them: ‘at present all [he could] write [were] these little epigrams, first eight-liners and now only four-liners’, he noted in his journal in the middle of 1940. War Primer was not finally published until 1955 and, in an afterword to his translation for the Verso edition, John Willet outlines the genealogy of the work.

Walter Benjamin also provides a way of understanding Brecht’s methodology for, in his early concept of criticism, Benjamin  includes the notion that there is a truth in a work of art, one redeemable through a process that unfolds what lies within it; making universal what looks to be particular, releasing connections contained within its many-sidedness. Brecht can be seen to be doing something similar in War Primer, selecting photographs circulating in the mass media during the years of World War II and interrogating them for a truth value contained within.

In The Eye of History, Didi-Huberman identifies what Brecht was doing as an application of his concept of distancing (Verfremdung);  a riposte to conventional news reporting’s basis ‘on things at the expense of relationships, on facts at the expense of structures.’ What Picasso did in painting, Eisenstein in cinema and Joyce in literature is akin to Brecht’s desire to create an epistemological crisis in visual representation by drawing attention to lacunae, to what cannot be seen. As with Verfremdung in the theatre, the intention is to defamiliarize, to show that something is being shown, represented, and is not the eternally real. Montage was a heuristic principle for Brecht.

Didi-Huberman’s target of criticism is the ideological price tag that comes with the tendency to immobilize images. Historians, he argues, reduce them to mere visual documents while aesthetes regard the objects of seeing as there to be ‘read’, their iconography deciphered. These viewpoints are rejected as simplifications that position the viewer at an immovable site, thus flouting the migratory nature of images and blind to the need  to construct a position that allows the subject’s gaze to vary its point of view and respond to ‘the eye of history’. Didi-Huberman lauds Brecht as the inventor of dialectic images , creating ‘from the documents of modern barbarity, great subversive and lyrical poems’ and thereby bringing pedagogy and poetry together in a unique way.

Brecht deconstructs images, not in the laissez-faire fashion so beloved by tenured post-modernists but with a view to reconfiguring their visual elements, exposing contradictions and political relationships that lay hidden. Adam Broomberg and Oliver Chanarin, willing inheritors of Brecht and his Verfremdung, achieved something along the same lines when they juxtaposed images of violence and war over pages of Christian scripture in their Holy Bible (2013). The same artistic instinct to disrupt conventional representations had expressed itself earlier when they deceived the British Army into thinking they were journalists and became embedded with the army in Afghanistan. Their work, The Day Nobody Died (2008), took the form of six-metre strips of photographic paper exposed to the sun for 20 seconds.

War Primer 2, winner of the Deutsche Börse photography prize in 2013, was first published in an expensive limited edition by MACK but it is now available in paperback. Broomberg and Chanarin extended Brecht’ subject area to include the so-called ‘war on terror’ by superimposing images, using screengrabs from the internet and photos from mobile phones, onto the original black and white ones. The four-line epigrams remain on the page and they serve as trenchant commentary on contemporary events as well as reinforcing the validity and truth of Brecht’s insights into the role of images in relation to the representation of war.

To properly appreciate War Primer 2, it helps to have Brecht’s book ready to hand. The image of a smiling George Bush serving a Thanksgiving turkey to US troops in Baghdad leaves at the foot of the page a pot of food from the original photograph; it was Hitler who was about to tuck into a serving of the stew and his ghostly presence adds a side plate of acerbity on reading Brecht’s lines: ‘World conquest. That is all I want. From you / I have but one request: give me your sons.’

The message that comes from Broomberg’s and Chanarin’s eye of history cannot be reduced to the simplistic level of an anti-American splurge: Brecht cut out a photo from Life magazine in 1939 showing a Nationalist General attending an open-air mass to celebrate Franco’s capture of Barcelona and a corner of it now shows kneeling jihadists; the colour of the battle dress may change but the force of fascism behind the uniform remains a constant.

Being true to the content of Brecht’s War Primer, its reincarnation necessarily contains some disturbing images of war but their inclusion is justified by their fidelity to the lines of poetry written in response to the original ones.

An exhibition of the work of  Broomberg and Chanarin, Divine Violence, is currently on show at the Centre Pompidou in Paris.

Sean Sheehan is an author living on the Sheep’s Head peninsula in Ireland. He is the author of Jack’s World, with photographs by Danny Gralton and Ciaran Watson.

The Eye of History: When Images Take Positions, Georges Didi-Huberman The MIT Press.