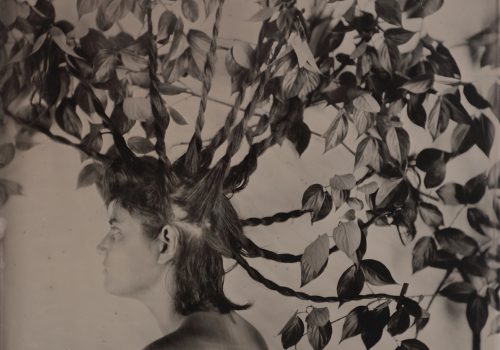 Rachel Portesi (b. 1971, Boston)’s Hair Portraits is a series of tintype photographs of female and femme- identifying models of varied ages and ethnicities who consider hair to be a large part of their identity. The exhibition addresses fertility, sexuality, aging and mortality, vulnerability, and intergenerational trauma— as well as harmony and discord with nature.

Hair Portraits, organized by Brattleboro Museum Chief Curator Mara Williams, reflects on the fact that since the beginning of human history, hair has held symbolic significance. Hair’s inextricable link to identity is rooted in the fact that it is one of the only aspects of an individual’s appearance over which they can have near-full control. It can be dyed, cut, braided, worn in the form of a wig or extensions, concealed, shaven off, or styled endlessly. In the context of Hair Portraits, this notion of control takes on an exaggerated visual form, in that models’ hair is literally pinned to a wall for an effect that often appears, in the tintypes’ final state, to defy physics.

Each tintype photograph in Hair Portraits is the culmination of hours Portesi spends making a collaborative ‘hair sculpture’ with the model as the model stands against a wall. The subject’s hair is fastened to the wall itself with push pins, intricately intertwined with symbolic objects such as fresh flowers, twigs, large plant fronds, family heirlooms and mementos, and additional flora from Portesi’s garden in Vermont. Several of the ‘hair sculptures’ also use ceiling-suspended fishing line for additional volume.

Portesi’s representation of multiple ethnicities and sexual identities, while not deliberate (her model pool for the particular Hair Portraits on view at BMAC was “three friends who were excited about the project”), speaks to hair-related identity as a universal construct, but one that is unique to the lived experiences of the individual. The selection of Hair Portraits on view at BMAC includes 17 tintype works of three dimensions, which collectively depict the hair of these three models. The exhibition will also feature a film piece comprising ‘hair sculpture’ process footage shot on a combination of three devices: a hand-crank 16mm film camera from 1948, a Super 8 film camera from 1978, and an iPhone 6 from 2014.