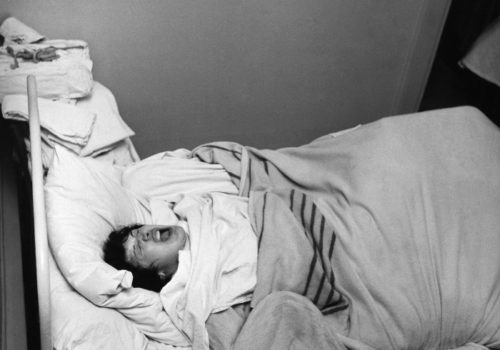 “I stayed 6 weeks in mental hospitals. The agitator who breaks everything and lives naked in a cell in the soiled straw; the alcoholic on drug treatment, whose vomiting pierces the night and flows materially under his door; women in camisoles, prostrate, desexed and mustachioed who throw themselves to the doctors’ necks. What patience! Bottomless looks, words without follow-up. (…)

At the White House Psychiatric Hospital, I had seen, as on skid row, a foolish cohort of doddering women, twelve to seventy years old, who came to the bath: smelling terribly. The nurses undressed, bathed, rubbed, rinsed, gave them clean clothes out of the autoclave. After this salutary ceremony, the unfortunate women came back before me, dolled up, all fresh, smiling, heartbreaking: “Hello sir, Hello sir, Hello sir, etc …” But the same smell persisted. It was in them. As if it was not enough for them to be crazy. (…)

I can still see myself in the Oise, with my friend Michel Desjardins, framed in front, behind, and on the sides by strong nurses, such as Al Capone and his lieutenants, strolling in the pavilion of the foolish criminals, antisocial. People who had murdered father, mother, wife or neighbor, and who, the day before, had killed five, with pencil blows in the eyes, an isolated guard. I was locked in the cell of a patient who could not even be dropped among the others. The walls were covered with charcoal and chalk drawings, repetitions of each other, faces copied from magazines and, above all, large clocks marking different hours. We had, while I was taking pictures of him, a very simple and rather inconsistent conversation, but my presence in his cell did not seem to surprise him.

Again, I took pictures hard to publish. The forever retarded kids, permanently tied up to toilet who, from the children’s pavilion, will pass to that of adults, then to that of old people, to close the cycle, since they are doddering in childhood and infantile in old age. Much later, they will die. Crazy people die very old – without ever having thought (de cogito ergo sum), or thought that life is something else. ”

Jean-Philippe Charbonnier A photographer talks to you, Grasset 1961

Jean-Philippe Charbonnier. Telling the Other and Elsewhere (1944-1983)