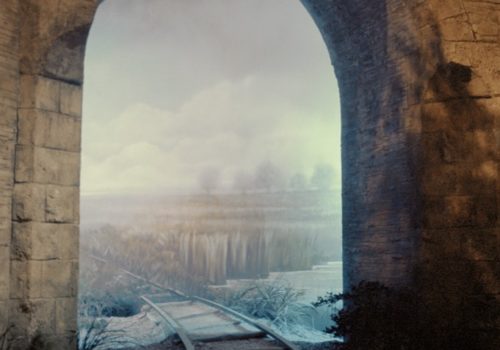 The first thing we encounter in Eden is a man. The image depicts him engulfed by a sea of bougainvillea with bright green leaves and magenta flowers growing so enthusiastically that we see only his face, especially his sky blue eyes. He is alone. In the following image, a railway leads into a painted background, the kind used in films or theater. With the man’s delicate serenity and the track’s sarcastic impenetrability, Argentina-born, Spain-based photographer Bernardita Morello begins an archetypal narrative of desire and delusion.

Morello made Eden in a state of flux: she chose the spontaneity of a compact, 35mm camera instead of her usual medium format; she moved from the Netherlands where she lived with her partner to Spain where she lived by herself; she began thinking about paradise, then expanded to reconsider her entire worldview. In the end, she had one goal: make all the photograph she wanted, without hesitation or doubt.

The images included in the book, which received the Fiebre Dummy Book Award and was published in conjunction with the prize, document Morello’s enchanting perspective of the world. She unabashedly pairs the real with its imitators: a bushel of fabric flowers in one image appears no less realistic than the neon vibrancy of wild flowers a few pages later. In some instances, Morello layers images to produce moments that demonstrate how easily the mind can be fooled when we don’t take the time to check for a situation’s veracity. In one spread, a rocky hillside that offers an almost perfect horizon of continuously jagged rocks reveals itself to be a simple collage of similar images. In another spread, Morello takes advantage of photography’s persuasive storytelling capabilities by creating whimsical propagandas: bee-infested watermelon slices sit across from a leg with an apple-sized red blotch surrounding a bug bite, implicating the bees in a crime they may have had nothing to do with.

Throughout Eden, Morello’s expert editing guides us in and out of seemingly disconnected moments. With careful sequencing, however, she reveals the inherent human desire to find meaning in the chaotic world around us. Images in the center of the book illustrate the nonlinear tumult we experience, overlapping as though they were irregularly printed on a globe and then folded into the pages. Counterbalancing this immersion, the first and last thirds activate the white space of the page. The contrast effectively creates a section of quixotic engagement surrounded by decelerated contemplation.

Eden offers no answers. Instead, the book celebrates the discoveries, misunderstandings, pleasures, and pains of everyday life. These are the things we can appreciate when we stop trying to reach paradise.

Amelia Rina is a critic, writer, editor, freelance philosopher based in Brooklyn, NY.