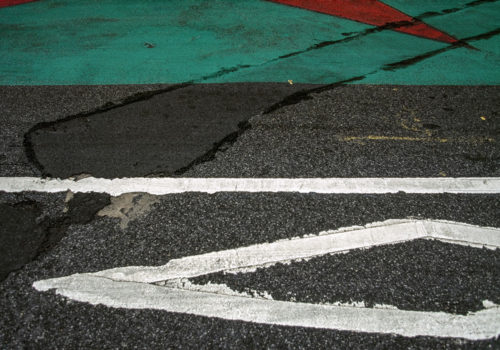 “Creativity, with the help of Colour, is not just arbitrary creation but a movement which propels life.” – Franco Fontana

Atlas Gallery presents Language of Colour, the first UK exhibition in 17 years of work by Franco Fontana (b.1933), the pioneering Italian colour photographer renowned for his intense and abstracted ‘scapes’: landscapes, seascapes, cityscapes and bodyscapes. The gallery is showing selected large works from across Fontana’s career, as well as a collection of more than 170 unique Polaroids.

Fontana’s true subject has always been colour and how it can express something beyond visual reality, even when the literal subjects of the artist’s photographs are fields, buildings or city pavements. It is easy to forget now how demanding colour photography was technically in the early Sixties and what a radical shift it was away from the established norms of black and white fine art photography.

Fontana’s images are flooded with a shimmering brilliance that shifts meaning to another register, at once abstract and poetic. Here are landscapes in sweeping curves or made up of stripes, as if passing at speed: Fontana’s eye is always travelling. When it does settle, both land- and cityscapes appear as composed from vivid building blocks whose colours collide and sizzle on the image surface. The earliest image on show at Atlas Gallery was made in 1968, an early Asfalto photograph, Fontana’s series of pavement markings that are his anonymous souvenirs of life on the move. The most recent is of Havana, made in 2017. In between, there are Autostrada images, Moroccan streets, American architecture and Spanish seascapes… but always Fontana’s eye returns home to the ancient curves and deep colours of the Italian countryside.

Like many artists, Fontana used the Polaroid camera to make images that are spontaneous, intimate and experimental. In a pre-digital world, each sheet of Polaroid film produced a unique photographic artefact. “The Polaroid: a magic trick, a mirage that would take form before your very eyes, mesmerising and developing in a few minutes,” Fontana recalls. “A moment captured with the joy and satisfaction brought about by the thought of seeing the result immediately, a childlike kind of joy.”

The 173 signed and dated Polaroids (made between 1980 and 2001) in this exhibition embody moments when the artist was caught by a particular interplay of shape and colour: nudes entwined in lengths of red fabric in sparkling turquoise swimming pools and on dry land, architectural details and street scenes are all relocated to the Polaroid’s distinctive frame.

Franco Fontana was born in 1933 in Modena, Italy. His work has won many awards, including when in 1992 Tokyo Metropolitan Museum named him as one of 23 photographers who had “created a new age”. He has published more than 100 books in seven languages and has recently been awarded the 37th Hemingway 2021 Award for Photography for his book America (Contrejour Editions, 2020). Fontana has had many solo exhibitions worldwide and his work is held in collections including MOMA, New York; Australian National Gallery, Canberra; Art Gallery of NSW, Sydney; Stedelijk Museum, Amsterdam; Metropolitan Museum, Tokyo; Museé d’Art Moderne, Paris; Pushkin Museum, Moscow; Museo de Arte São Paolo, Brazil; FMAV, Modena; Galleria d’Arte Moderna, Turin; Victoria and Albert Museum, London; the Museo Nacional de Bellas Artes, Buenos Aires; the Finnish Museum of Photography, Helsinki.