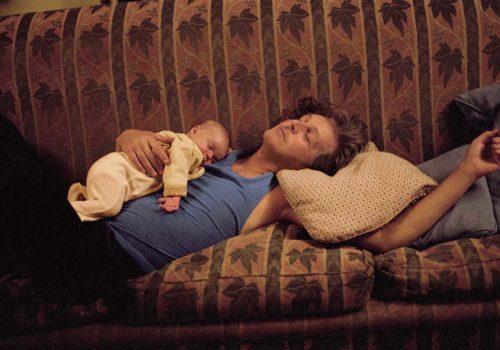 “It was by taking the time to go through all the contact sheets and photos in my archives that the idea for the exhibition came to me. I found moments of great simplicity but full of emotions. They are presented here.” –Mary McCartney

This summer, Château La Coste will present Mary McCartney‘s first exhibition in France. Moment of Affection will retrace thirty years of the career of the British photographer, from its beginnings to today. More than twenty works from her personal archives mostly never seen before will be presented, including recent shots, taken during the last two years of confinement.

The exhibition is inspired by a recurring theme in McCartney’s work: capturing rare and spontaneous moments of intimacy. Whether they are tender portraits of her family, photos animated by intense emotions or poignant snapshots gleaned from nature, McCartney’s photos have in common an immediacy and a universality of great evocative force. Through fundamental themes such as love, desire and mourning, they summon emotions and bring memories to the viewer.

Since her debut, McCartney has never stopped “collecting memories” with her camera: in her own words, she “collects photos”. In constant search of tender gestures and fleeting moments to capture, she has accumulated, over the years, more than 5,000 contact sheets. The idea for the exhibition at Château La Coste came to her a few years ago, when she was browsing through her archives with her friend Georgina Cohen, co-curator of the exhibition and director at Gagosian, with whom she had collaborated. during her “Mother Daughter” exhibition in New York. After two years that have profoundly changed our relationship to the world and to others, the photos chosen by McCartney and Cohen for the project at Château La Coste have acquired a new dimension and increased emotional power.

The exhibition will take place in a magnificent gallery of 80 square meters, located in the original bastide of Château La Coste. The 23 prints, the vast majority of which were taken with a Leica film camera, will be organized around two themes: tenderness and tranquility, on the one hand, and more excited manifestations of love and passion, on the other.

The first group of photos includes portraits and still lifes. McCartney’s talent for capturing the tenderness of filial love is beautifully reflected in photos of her own family, including a black-and-white portrait of her mother hugging her sister (Mother and Sister, Sussex, 1995) and a color photo of her father sleeping with his grandson, the eldest son of Mary McCartney (Family Circle, Sussex, 1999). In another black and white shot, the fervor and communion that music can engender can be seen in the faces of two young fans attending a concert of English musician Morrissey (Fervent, London, 2004).

The second part of the exhibition brings together more dynamic photos. The amorous impulse and the ardor of youth are sublimated by the black and white kiss of a young couple (Snog, 1999), while the electricity and the excitement preceding a performance show through in the photos of dancers taken in backstage at the Royal Ballet (Kick Back, New York, 2004). Finally, the color photo of two white horses rearing up on the McCartney family estate in Scotland testifies to the photographer’s interest in animal subjects (Frisky, Sussex, 2016).

According to Georgina Cohen, co-curator of the exhibition : “It is a great pleasure to have contributed in setting up this project. Mary is a friend and I am lucky to have worked with her in the past. “Moment of Affection” is a beautiful, soul-uplifting exhibition that captures universal emotions. It will reach a wide audience, especially in these tormented times that we are going through.”

Born in London in 1969, Mary McCartney has long devoted her photographic work to portraiture, a practice in which she places her relationship with her model at the heart of the creative process.

Her past exhibitions and publications include ‘Off Pointe’, a behind-the-scenes study of the Royal Ballet. Photos from this series are now part of the permanent collection of the Victoria and Albert Museum in London. Unveiled in 2004 at the Royal Opera House, “Off Pointe” was also chosen by the Royal Photographic Society to feature in the London Photo Pavilion at Somerset House in 2019.

In 2008, the “British Style Observed” series was exhibited at the Natural History Museum in London and in 2010, “From Where I Stand” was the subject of two exhibitions in the English capital: one at the National Portrait Gallery , the other at the Michael Hoppen Gallery. In 2014, the publication of the two volumes of “Monochrome Colour” by GOST coincided with an exhibition at 3 Grafton Street, orchestrated by de Pury de Pury.

One of McCartney’s most recent projects has her following preparations for the stage play, Twelfth Night with comedian Mark Rylance. All of these photos were published in a book entitled Twelfth Night 15.12.13.

Located in one of the oldest French wine regions, between Aix-En-Provence and the Luberon National Park, Château La Coste is an estate where wine, art and architecture coexist in harmony. Open to the public since 2011, the 500-hectare site now houses five art galleries and more than 40 works of contemporary art in its gardens.

The landscape of Château La Coste is constantly changing, according to the projects and installations that are emerging there. Each year, artists and architects are thus invited to create works for the park and to choose the location that will best suit their creations. Big names already represented in the permanent exhibition include Frank O. Gehry, Hiroshi Sugimoto, Louise Bourgeois, Richard Rogers, Sophie Calle, Tracey Emin and Jean Nouvel.

EXHIBITION ACCESSIBLE UPON PRESENTATION OF THE RENCONTRES D’ARLES 2022 PASS