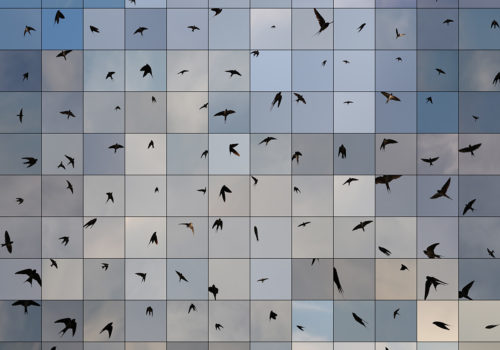 “It was a wonderful summer weather, not too hot, the swallows were tracing in the blue of the sky great curved lines that you thought you could still see when they had passed.” – Guy de Maupassant, Bel-Ami, 1885

There are strong images which sometimes are images of childhood, images that mark, that hold in the memory and with which we go through life. We never think about it, but a chance noise, or smell, a color or a sensation make them spring up in us. Our Sky Blue project comes from one of these images: swallows lined up on electric wires during the first days at the beginning of the school year in September. The memory of a community of flurrying birds that comes together before the great departure for Africa – the migration and its invitation to travel.

This project, which has animated us for two years, has found the support of the Villa Medici, which has hosted us in artistic residency twice in the past year, and of the Swiss Life Foundation. Winners of the Prix Swiss Life à 4 mains with the composer Régis Campo, the work is presented in a program of 6 photography and music exhibitions in 2021 – salon Approche, Musée de la Piscine in Roubaix until September 5, the Rencontres d’Arles from July 5 to 25, Musée du Jeu de Paume in the fall and at the Arrêt sur l’Image gallery in Bordeaux from September 9 to 30.

We have photographed swallows in Italy, in eastern and western France as well as in the Paris region. Early in the morning, or before sunset, their flight outlined movements in the sky to be grasped, like spaces of freedom and creativity. From these images and a matrix structure, we designed a large number of parts. Varied in their dimensions, they are all organized in checkerboards that allow you to jump from one box to another, from one swallow to another and to multiply the directions of reading. As in chronophotography, the images follow one another, chase each other and are set in motion. They try to account for the feeling of speed and break lines so characteristic of the flight of swallows.

In Arles, the Swiss Life Foundation is launching the new edition of the Prix Swiss Life à 4 mains, and exhibiting Le Bleu du Ciel, winning work of the 2021 Award.