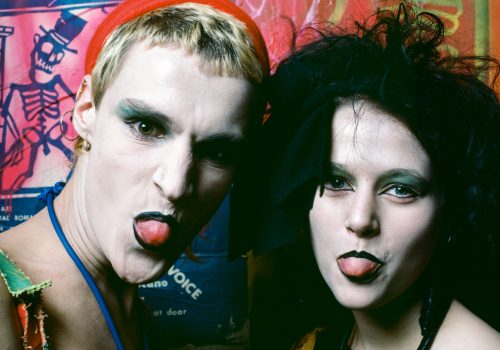 In the 1980s, Danceteria, the after-hours nightclub was the place to be and to be seen. Six floors of craziness with a different kind of chaos on every floor. Bands, performance artists, DJs, video installations, go-go girls, exhibitions, restaurants, and of course plenty of dance floors.

Madonna and Sade did their first live performances at the club and also worked there. Madonna was also featured dancing through the club in the movie “Desperately Seeking Susan”.

A few times a month, Fashion Shows would wander through the crowds on each floor. The shows I attended brought in a wide range of designers from Paris, London, Berlin, Manchester, Kensington Market, Amsterdam, and Toronto.

I gained access to the basement, where the make-up, hair, and wardrobe crews would get to work and prepare the models for the shows.

In a very narrow, crowded hallway, I would set up one light with an umbrella and grab quick portraits of the models just before they went on.

Working with 35mm cameras and Kodachrome 64 film. Testing for light and shadows with a light meter and a Polaroid camera back. I also had an assistant get the models to sign a release and attach reference Polaroids.

This was a time long before everything and everyone was being documented with mobile phones, selfies, and shared all over social media. No instant posting in those days. The film would take time to be processed and prints were eventually made.

It was actually a bit of an event to be photographed back then. Models appreciated and were honoured to be recorded on film.

Wild times they were as I witnessed and documented the characters that showed up. Some models as young as 14 years old, hoping for a dream…