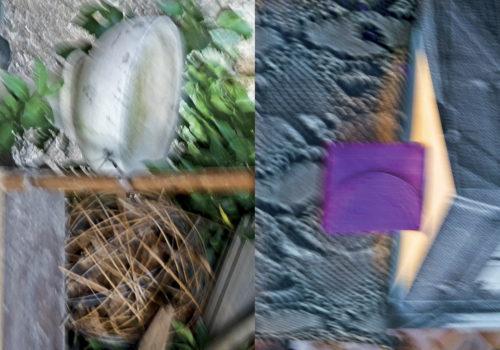 I started the book Unanimated in February 2003 and I finished it in 2015. Always shooting occasionally during my constant traveling. I was not entirely satisfied with the work, I felt the need to continue and, in 2020, I completed Unanimatedue. Meanwhile, Peter Weiermair, who had published Unanimated with his publishing house All Saints Press, passed away. I didn’t have the energy to look for another publisher, and I published Unanimatedue in virtual form on my conceptual books web site.

The basic idea was to develop a research on a sort of “geometrical abstraction”, to be formalized through movement. The subjects, always found and never set up, could be the most disparate “objects”, not always significant as such, but structurally captivating, and, through the blur tech- nique, I tried to transform them into something different. My goal was to distort reality through a simple technical gesture and, hopefully, convert it into an ambiguous and elusive abstract composition, a mostly abstract composition, but with a “rigorous geometric linearity”.

A philosophy, perhaps a metaphysics, of transfiguration and translation. The technique I used to achieve the blur effect was radically different from the one used with the video camera (with which I had made Fugitdigit, Sexuences and Blackstage): it was, instead, an evolution of what I had always done with the camera. A technique that requires different, more complex, more pre- cise movements.

I had been experimenting in that direction for a few years, but the idea had definitely taken off when in 2003 I bought my first pocket digital camera, equipped with a 35-70 zoom.

The presence of the small screen on the back of the camera no longer forced me to stay glued to the eyepiece to check the shot and allowed me physical movements, previously unthinkable, which greatly expanded my creative possibilities. In addition, digital photography gave me the ability to take many more shots, to see the result instantly and, despite the screen being very small, to adjust the shot. But like all pocket cameras, it was automatic and only allowed me to view the diaphragm and shutter values on the display. To achieve a blur effect, the diaphragm aperture is almost irrelevant, but the shutter speed is fundamental. In fact, to get the effect I was looking for, it had to be set between 1/2 and 1/15 of a second. It is an indispensable condition and, consequently, this forced me to shoot only in precarious lighting conditions. At that point, during that split second in which the shutter remains open, there are two inseparably close phases.

In the first one the hand must remain still, in the second one it must be moved with a sharp twist of the wrist and arm, which, now that I could keep the camera away from the eye, involved the whole body. Nonetheless, the movement of the hand is never the same and changes according to the kind of blur effect you want to obtain. Only through that physical gesture, which is always difficult to manage, will the chosen subject, perhaps, turn into that “something else” which I was pursuing. Moreover, and it is not a negligible aspect, this physical involvement returned with many of my first works of the mid-seventies, where the body of the photographer, at different levels, played a fundamental role. Perhaps because, in that period, my main artistic activity was performances art.

Contrary to what one might think, in this kind of photography there is very little room for for randomness and, to obtain the desired blur, the gesture must be perfect.

Sometimes, but only very rarely, the desired effect is achieved despite the awkwardness of the movement and the lack of synchronization, entirely by chance. For each subject I identified, I

had given myself the rule of not making more than fifteen attempts. If, within fifteen shots, the eye and body had failed in their intent to perform the desired blur, I would give up. This was an ethical rule I was really very keen on, that added a philosophical nuance to the research.

All this was in total contradiction with the golden rules of photography, including those about light intensity. Even with a cheap pocket camera intentionality was possible and made sense.

Since this work was conceived as a book and not as a collection of photographic works to hang on the walls, in this portfolio, I think it is more correct to present some pages of the book itself.