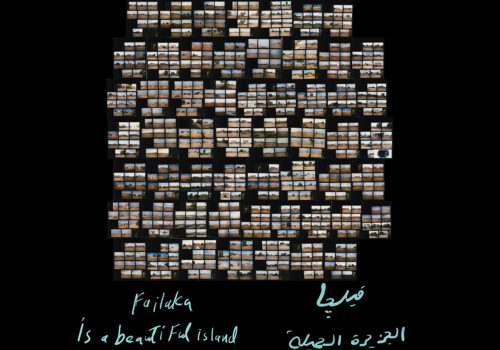 How can we tell the story of a city? Will books be enough? Will old pictures give it justice? One story of a city can be told through its buildings as they stand witness. One can feel it through the people who lived in them. My story begins in Kuwait – my memory of Kuwait – a harmonious place. Buildings were built low, they had soothing color tones, and I could always see the horizon.

Developed in the 60s, the city of Kuwait had its own color palette. When my father drove us there, it felt like I was in a hand colored old Egyptian movie. Between the downtown buildings, I could still see what remained of older Kuwait. Wooden boats laying on the shore, houses built by our grandfathers’ bare hands using mud, seashells and corals. Everywhere stood lots of trees, palm trees, and wild plants. It felt like walking in my parents’ stories. Mother told us about her father going to India to bring merchandise, my father about their farms of palm. I could feel their stories, I could see the trail of time with my eyes. Little did I know that this trail would disappear sooner than I expected.

In times of greed and ignorance, history is sacrificed. The old tales are erased, and cities are lost. I lost mine. My Kuwait is not the same any more. Since the invasion of Kuwait in 1990, the development of the country took yet another turn. It had slowed down only until the second gulf war in 2003 then progressed rapidly. There was a movement erasing everything that represented the modern Kuwait. In the 1950s developers sacrificed the old gated city that lasted more than 300 years in the name or urbanization claiming modernity.

A few years ago, my family took me on a trip to Failaka Island. The minute I disembarked from the ferry, I felt that I traveled back in time to my Kuwait; it felt like home. Since the invasion of 1990, time has stood still in the island. Inhabitants had to evacuate; the houses tell their stories. The houses are merging with landscape; the trees have surrounded doors in an attempt to protect them. Even the materials had a beautiful simplicity about them –  the mud, coral, and shells they were built with reflected an intimacy with the sea, and the pearl divers who went to it and never came back.

With time, I realized Failaka Island was a metaphor of a generational trauma – a trauma that was passed from my mother’s generation to my generation. It is as if we lived the same pain twice. In digging more into myself, I realized that the trigger was that I never saw my mother’s house in Kuwait’s old city. I grew up with tales and stories about her childhood, and I can tell that this was the happiest time of her life – when things were simple and there was so much love for both people, but also the country. I documented all the houses on Failaka Island with the hope that 100 years from now, the great grandchildren of anyone who lived on the island can see where their family once lived – something I long for myself.

Mohammed Alkouh is a research-based visual artist from Kuwait. His work encompasses Analog Photography, Hand drawings, Archival materials, and hand coloring of black & white photographs. Al Kouh’s work reimagines the collective memory of the Arab world with an emphasis on Kuwait; encapsulating its ephemeral nature and grandeur. Alkouh finds himself continually returning to the liminal space in-between the past and present – where his surreal imagery is cast against a transient reality. He navigates these parallels and interwoven timelines as visual commentary on the scattered national identity. The artist confronts his own sentimentality and longing by investigating its source. He unearths his deeper and unconscious gravitation to the fragmented memories and decaying structures around him.