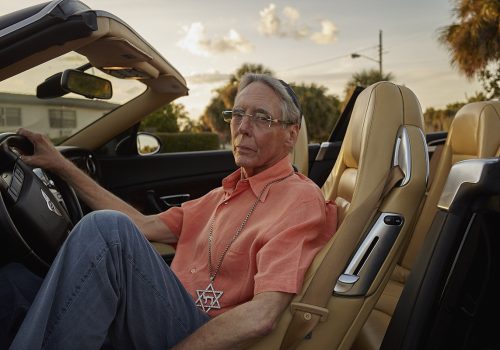 In Zachary Balber’s series Tamim (which roughly translates from Hebrew as “perfect”) he has his subjects stand at attention, instructing them to pose (in his own words) “As if the Nazis were getting ready to fire at them.” The artist also asked each of the men to wear his kippah, the head covering that Balber was Bar Mitzvahed in. As Balber then asked each man to take off their shirt, he discovered how powerfully all of this made them reveal themselves to the world ‒ and how this reflected his own life journey back at him through his lens.

What followed was a mutual odyssey of reconnecting to their culture, for both the subjects and the photographer. They share common, severe life challenges such as incarceration, addiction, recovery and rehab. Like Balber, they also felt estranged from their culture and their families, and have lived as outsiders. At first, Balber did not know that they were Jewish too. Through this process the artist exposed common heritage, fears and insecurities ‒ and their ultimate survival ‒ through these portraits that cut through uncharted terrain. Balber describes them as his very own “lost tribe of outsider Jewish men.” Despite their rough “Rambo-Jew” exteriors (as Balber calls them), through their gaze into his camera lens they reveal a surprising boyish innocence. The viewer cannot escape the humanity in these images. “These guys can, and DO, belong,” says Balber. “No one seems to be talking about these types of outsiders in this way.” Whereas before they hid their culture and heritage under extreme exterior facades such as tattoos and gang symbols, in these photographs they each stand proud and unashamed to be themselves – the meaning of Tamim. One of the subjects is Balber’s father, photographed after he was released from four year prison term. He passed away shortly after posing for his son’s camera. This is the first time that these photographs have been exhibited in full color, and some of the images are new and have never been shown before.

Balber and the men in these photographs shared their experiences of being disconnected from the world. He used portrait photography to uncover the camouflaged identity of some of Judaism’s most unconventional Jews. He connected with the men he photographed, and this helped him rediscover his own heritage, in ways very different from his childhood exposure to organized religion. Through the course of his own difficult life challenges, Balber met and helped these men, who also took him under their wing. They worked together on bettering their lives and finding their Higher Power through a spiritual awakening. Balber became a speaker and mentor for other young adults, sharing his experiences and helping those who were facing similar situations. It was as a child on a visit to the Holocaust Museum in Israel, with his father, that the artist recognized the power of photography. There, he witnessed how photography captured these stark horrific realities and this inspired Balber to become a photographer himself.

“These photos are like my smoke-signals to the rest of my Jews out there who also feel like outsiders ‒ where are you?” says Balber. “I hope others who also feel estranged from their culture come to see this series, including other Jews who haven’t been inside a Temple in a long time because they feel like they don’t belong. My hope is that they feel more comfortable coming to an art exhibition, at this historic Synagogue that means so much to the community and is now a gathering place for art.”