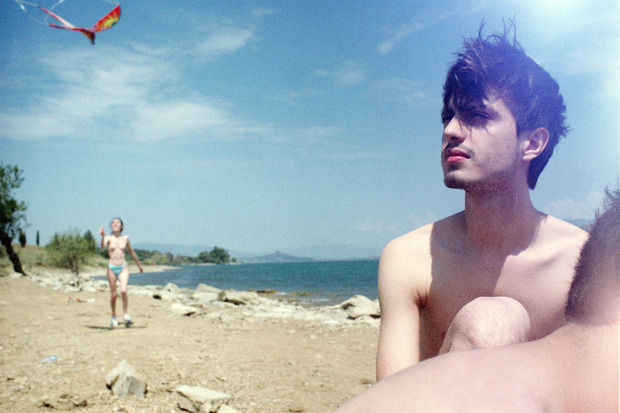 Nestan Nijaradze, editor of the Georgian magazine Photo, is presenting for the first time in Moscow an exhibition of six young photographers from her country. Two years after the war that divised the two countries, the exhibition is a local event. But war is not what we find in the images. “I came to show the new wave of Georgian photography, and for this I chose the Pobeda Gallery, which is the most serious in Moscow in regards to photography. A veritable photographic revolution happened. Everything changed for us, society, values. Photography has become the key medium between artists and the world.”

The curator admits to the heterogeneous character of the exhibition. She chose photographers whose work has been the most significant over the last 15 years. “They are all between 32 and 40 years old. One lives in London, the other in Berlin…” she states, underlining that they were strongly influenced by European photography.

This is immediately perceptible in the work of David Meskhi, with his immense prints, his taste for the blurry, the spontaneous, the improvised, the brutal contrasts and a very visible grain. Perfect for illustrating an album jacket of alternative american rock…

The influence seems more subtle in the work of Beso Uznadze, entitled “Don’t wake me up” (a work that was already exposed by Nestan Nijaradze in Arles last summer). 13 prints at 30×20 and 5 large prints at 60×40 “relate the solitude of the artist through the subjects,” analyses Nestan. Morning fog, subdued lighting, bodies abandonned to sleep inspire melancholy in the spectator, but without morbidity. The subjects pose like those of an italian renaissance painting, but with expressions as though they are half-asleep. Sometimes incongruous details appear, like an enormous dildo on the floor next to a couch on which a naked man sleeps.

A thousand miles from the narrative, Guram Tsibakhashvili puts himself into conceptual photography. His “notes” are combined with black and white photographs taken during the soviet era, accompanied by abundant legends written in the Georgian alphabet. On each photograph is printed in blood red a communist symbol: sickle, hammer, satellite, a bullet from a revolver, a red star…

Equally in black and white, and equally in a very conceptual persepective, Irina Abzhandadze shows us a series of nine photos entitled “victims,” essentially photography going into the abyss. Nine portraits of men who have been assasinated “pose,” hanging on the walls of the families of these victims. A stigma of the years of economic and social chaos in a post-soviet Georgia. And by its subtle framing, Irina Abzhandadze astutely manages to reinforce the tragic dimension of images of victims.

Guia Chkhatarashvili takes us to Svaneti, one of the most beautiful mountainous regions in her country. The simplicity of the images highlights the severe beauty of the landscapes, the ascetic life of the men that live in the mountains, and the traditions that are so particular to these hamlets isolated from the external world. A discreet humour manifests itself in these prints, where the animals seem to pose in a manner much more studied then those of the men…

And for the portrait enthusiasts, the hit of the exhibition will no doubt be the series by Yuri Mechitov dedicated to one of the sacred names of soviet cinema, Sergueï Paradjanov. The director of “Wild Horses of Fire” appears mischevous, first thing in the morning (under the shady regard of Pushkin), raising an eyebrow while he’s cooking, and frankly crazy with a bird cage on his head. In sum, as himself, but also losing control of his own image.