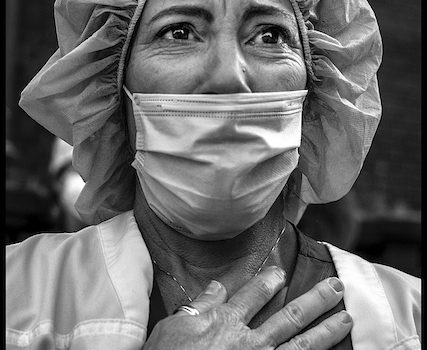 It is go time for Visa pour Image! Until September 27, 20 exhibitions retrace the highlights of the year’s news through the eyes of international photojournalists: coronavirus, environment, conflicts in Hong-Kong or Iraq … If you are afraid of not being able to do everything to discover, we have selected ten must-see exhibitions for you.

Peter Turnley has covered all the major events of the world: 9/11, Gulf War, Arab Spring and other major conflicts. Then the Covid-19 stopped everything. Overnight, the Franco-American photojournalist found himself confined to New York, with only the streets of his city for inspiration. He draws a logbook with portraits of heroes and victims of the coronavirus, which he describes as “a war against an invisible enemy”. What stands out are the looks: tired, sad, determined, smiling… Everyone has experienced the crisis in their own way.

“A planet drowned in plastic” by James Whitlow Delano

Plastic is everywhere. James Whitlow Delano tracks it down. In Tokyo, where he lives, shopping centers are the temples of plastic: bags, packaging, clothing, cosmetics, household appliances … Elsewhere in the world, developing countries face mountains of waste left in nature, on the road or on the seaside. The inhabitants trample them. The photographer’s work raises awareness of this major environmental challenge, while some countries, such as Peru, are not always equipped to eliminate the waste that ends up on their land.

“Closer to the Wolves in the High Arctic” by Ronan Donovan

In 44 photos, American Ronan Donovan unveils an intimate portrait of an arctic wolf family. A pack of six adult wolves males and females and four wolf cubs roaming the snowy Canadian plains, hunting musk oxen and arctic hares. An astonishing proximity between the wolves, referred to by their name in the legends, and the photographer of this reportage produced for National Geographic magazine.

At the Convent of Minimes.

Dutch photojournalist Sanne Derks is currently working on a long-term project, Cuba’s Hidden Water Crisis. In 2019, the communist state recognized the right to water in the constitution, as well as its responsibility to provide safe drinking water and sanitation. But in everyday life, is it that easy? The network is aging, checks by state officials ceaseless and incessant and tourism demanding in terms of comfort. Cubans stand in line in front of the tankers. The work of Sanne Derks illustrates these inequalities perfectly.

At the Église des Dominicains.

“Iraq: One Hundred Days of Thawra” by Emilienne Malfatto

The thawra, the revolution, has invaded the streets of Baghdad since autumn 2019. Between scenes of everyday life, moments of tenderness, and desolate landscapes of the Iraqi capital, Emilienne Malfatto sets the scene for a movement initiated by youth. The national flag, symbol of the revolt, is waved by the demonstrators, uniting the Iraqis in their rage and their desire to upset a corrupt system.

The year 2019 was marked by clashes in Hong Kong, which started in opposition to a bill for extradition to mainland China. The residents, mostly young, still fight for democracy today in protests violently repressed by the Hong Kong police. Between June and December 2019, AFP’s chief photographer on site, Anthony Wallace, witnessed street scenes that are sure to go down in history.

For this group show, Visa asked four major American dailies for a selection of their photographs of the Black Lives Matter protests, which followed the death of George Floyd. A dive into a black and white America, which has decided to stand up to institutional racism, and photographs closer to the protesters and the police who face them.

“Outside” by Axelle de Russé

“Dehors” is the story of four women, four ex-prisoners who leave the Joux-la-Ville prison (in the Yonne) and find their freedom. Axelle de Russé met Laura, Magalie, Adeline and Rahmouna in prison, and followed them on the way of the cross to reintegration. Her black and white photographs delicately testify to the loneliness, social and family rejection, wandering and hopes of these women as they try to rebuild their lives.

In this exhibition, around twenty French and international newspapers present one of their best photo reportages of 2020, in competition for the Visa d’Or for the daily press. The opportunity for visitors to take a tour of recent world news in pictures. Photos of the migrant crisis on the Turkish-Greek border, and of course the Covid-19 epidemic occupy most of the space, and invite us to look at these events differently.

At the Caserne Gallieni.