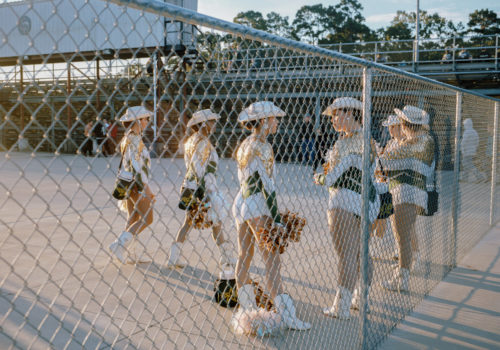 I remember. I must have been 12 or 13 years old. One late summer evening at a second cousin’s house, she had just returned from a trip to California with her father and showed us the VHS she had filmed. She also brought small jars filled with sand and Pacific Ocean’s water. I asked her to lend me these video tapes. I spent hours looking at them in my house. Motels, Hawaiian weddings, conversations with Italian-American relatives. And the road.  Plans of the road passing in front of the camera with the music on the radio and the wind blowing background. I watched mesmerized hours and hours on the road on TV. The photography was not yet the main part of my life but I thought that when I went to America, I would photograph everything, even the manholes. I was thinking exactly so.

I remember the first time I listened to Don McLean’s American Pie. A road trip with my parents and sister. France or Austria, 14 or 15 years old. I always sat on the left. From the window my eyes could see the Tyrolean houses passing by with flowering geraniums on the balconies and green meadows in August. My mind saw the desert and the palm trees of California. I listened to Don McLean and dreamed of the regret of my life: a year of high school in the United States.

I remember the nights with Steinbeck and Kerouac in high school and with Bukowski and the whiskey in college. The photographs of Dorothea Lange, Fandango and Paris, Texas. The river of my life diverted east of Eden.

I remember summer afternoons by the sea at my grandmother’s listening to Simon & Garfunkel, John Denver, Take me home, country roads. I had bought a cheap California travel guide with an approximate map that I studied carefully.

I remember, at the age of 13, the usaonline.it site and reading its stories and travel tips, looking at photos of the parks. I liked going to travel agencies and ask for brochures about the United States, look at hotels and small photos of rental cars, different than European cars.

Over the years, I realized that I couldn’t help but return to the States, physically or mentally. From the first trip, I trace on a map the route I take. I like to do this because it gives a little idea of the distances but especially because the lines on the map are nothing compared to what remains to be discovered.

I imagine myself at 80 with Pauline, driving west with the sun in our eyes, pulling over to take a photo and smoke a cigarette.