Tito Mouraz, The house of the seven women 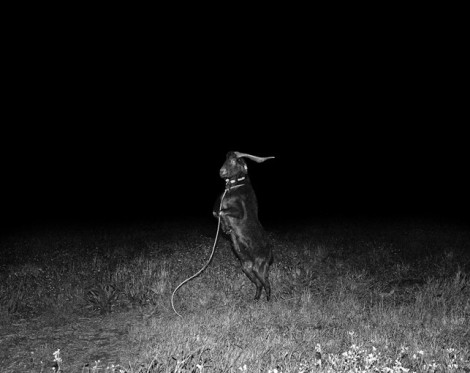 The photographs in this book were shot in Beira Alta, the native village of the Portuguese photographer, Tito Mouraz, between 2010 and 2015. “Here, everyone says that this house is haunted”, he says. “Seven sisters lived in this house, all spinsters. One of them was a witch. On the nights of the full moon, the women would fly, in their white gowns, from the balcony to the leafy branches of the chestnut tree on the other side of the street. From there they would seduce the men who passed by.”

The photographer developed his narrative listening to the people who had always lived there; it is as important to him as the act of photography. Coming back systematically to the same place, the images peer into its gradual transformation such as the slow disappearance of agriculture and the ageing of the population. Despite everything, he comes back to the legend, listens to the same stories, the same hooting of the owls, the same yelping of the foxes, and experiences the magic of the place.

The author Nuno Crespo writes in his introduction to the book, “Essential to this point of view is that each image results from an experimentation with the geography, the houses, the people, and, of course, from a confrontation with all the mysteries and magic which establish the density and intensity of a place. In this intensiﬁcation of a territory Tito Mouraz ﬁnds a kind of methodology that is no more than a way of thinking about a place he knows so well (this is his where he spent his childhood). Consequently, these works do not express strangeness; rather, they are the visible face of intimacy and of the presence of the photographer in the place he wanted to transform into image.”