“The Unseen Eye” on the road: All Aboard! 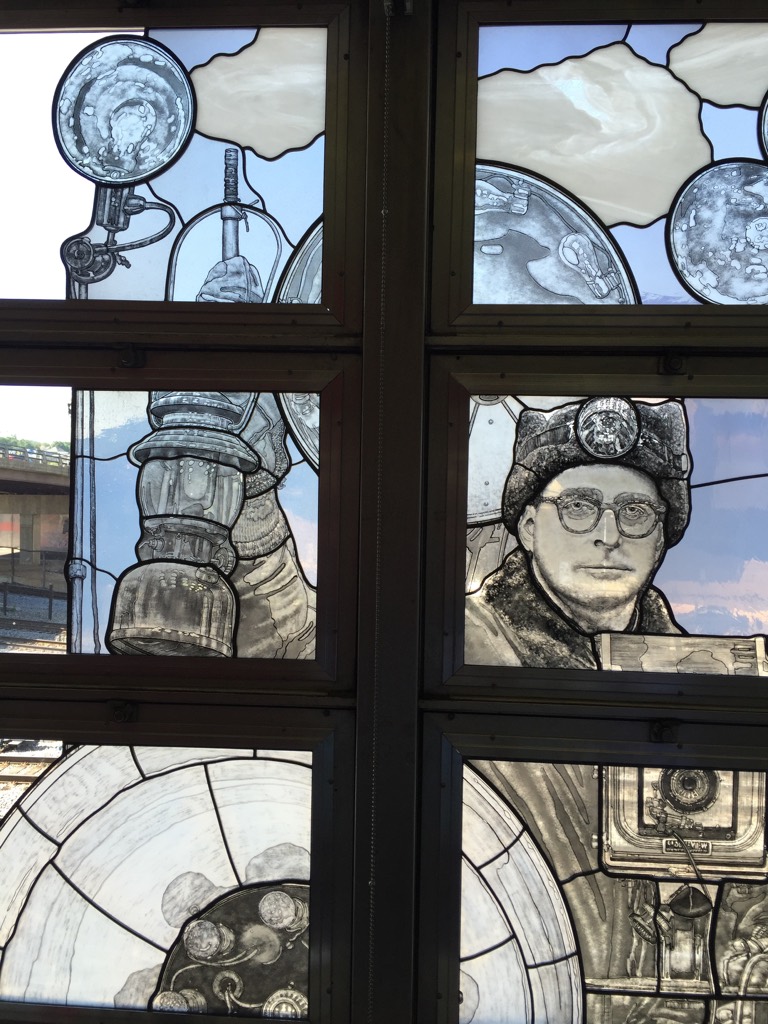 The O. Winston Link Museum in Roanoke Virginia is unique in that it is probably the only single artist museum in the US dedicated to a photographer. It is a shame that it is not better known because it is first class and worthy of a long visit. The Museum is dedicated to preserving, collecting and interpreting the photographic, audio and video works of the great American photographer O. Winston Link who documented the last days of steam along the Norfolk and Western Railway. There are over 300 black and white and less known color images with audio and video. Much of this appears to have been originally curated by Thomas H. Garver who had been Link’s studio assistant. The installation design is welcoming and informative.
“The Unseen Eye” went to the unveiling of a new permanent installation, “Window to the Rails”, a 45-foot leaded glass window. The artwork references O. Winston Link’s iconic photography, specifically of the classic 611 and 1218 engines. It depicts the two locomotives headed off in opposite directions along with Link’s iconic self-portrait surrounded by his extensive flash lighting equipment. Link’s nighttime work is stunning and unexpected.
The new window installation honors the late W. James Carter and the late David Helmer. Carter, like Link, was captivated by the railroad and if the Guinness Book of Records identifies the non-railroad individual who travelled the most land miles by rail it will be Carter. The new project was underwritten by Polly Carter, Jimmy Carter’s widow (and The Unseen Eye’s cousin). Helmer’s daughter Delta spearheaded the project.

The installation was fabricated by Phil Godenschwager from Vermont who worked from Link’s original black and white images and the Roanoke cityscape to create a dramatic glass mural that changes according to the light behind it. It is wonderful to see trains pass below. It is an ingenious solution to creating a memorial that feels classic and appropriate but is also contemporary and dynamic. Godenschwager also designed and fabricated the legendary animated clock at F.A.O. Schwartz.
Roanoke was once the headquarters city of the Norfolk and Western Railroad; the museum is housed in the handsome, landmarked former passenger terminal which was overhauled in the late 1940’s by Raymond Loewy, Loewy, “Designer For A Modern Era”, is known for streamlined designs like the Coke bottle and a number of Pennsylvania Railroad Locomotives. There is a also a small separate gallery dedicated to Loewy in the building.

The Unseen Eye falls in love in London

”The Unseen Eye” succumbs to the thrill of the chase

The Unseen Eye at Doug Dubois “In Good Time” at Aperture