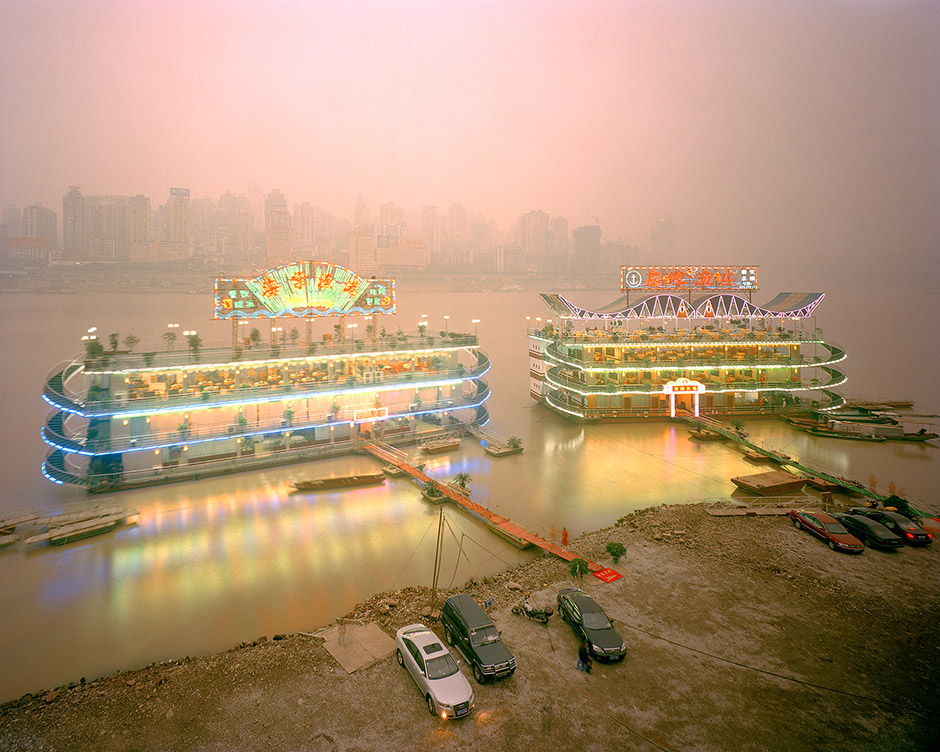 ”You may all go to Hell, and I will go to Texas.”
– Davy Crockett (American frontiersman and politician)

The caliber of the various exhibitions at the 2016 edition of Houston’s Fotofest’s “Changing Circumstances: Looking at the Future of the Planet” is very high, and the venues look good.  There is so much to see, so little time.

The breakout talent this year is Roberto Fernández Ibáñez from Uruguay.  His handworked, ephemerally delicate and seemingly modest work challenges the giantism of big color pieces of glaciers and trash.  Upon closer inspection the handsome oddness proves to be layered and textured reconsiderations of individual gelatin silver prints of drawings he has made of flow chart graphs from the internet.  The artist manipulates the emulsion to create profiles of mountain-like shapes of gray and sepia, like 19th Century engravings of unknown topographies, all with  subtle political urgency.   They are mesmerizingly exquisite and worth the trip to Houston, and for Mr. Fernández, these represent a seismic positive shift as an artist.  Yes, they are that good.

Jamey Stillings has shown work at Fotofest before, his bridge at Hoover Dam project.  His newer Ivanpah Solar power plant portfolio is exceptional.  This is a long term look at the construction of a 2.2 billion dollar installation in the Mojave made Desert, and the work ranges from clean aerial landscapes before ground was broken to overhead and on the ground images of the completed projects.   The later works play with the way in which all the 173,500 mirrored heliostats behave like points of light on a dark abstract field: handsome, epic and somewhat unnerving.  His Steidl publication traces the journey more clearly.  It is a perfect book.

There is much to take in with the central “Changing Circumstances” exhibitions with Silver Street and Spring Street Studios and The Silos at Sawyer Yards located close together.  (Williams Tower proved to be too far away to visit.)  Even though the theme may seem out of date – are we too late to save ourselves? – the mix of artists is fascinating with Vik Muniz programmed next to Mandy Barker and Chris Jordan’s heart sickening video (and stills) of sea birds and their fatal ingesting of plastic, Nigel Dickinson‘s deceptively inviting trash heaps lit by campfires in Phnom Penh and Daniel Beltra’s bold expanses of glaciers, to name several.

Separate from this, “The Discoveries of the Meeting Place” installation lives up to its name with some genuinely fascinating and often unfamiliar work.  The best is the photo/text/sound journal of Diana Matar’s searing search for her Libyan opposition leader father-in-law.  Her modest entries make your heart race and break as she chronicles her thorough investigation of his disappearance.  Haunting.

Similarly Clare Carter’s  “Corrective Rape” and Mahtab Hussain “You Get Me?” demonstrate mad soullessness in the world.

Mary Ellen Bartley “Standing Open” is less visceral, but great looking and sly, a smart photographic take on books about the same.  The accompanying texts by 2014 reviewers are strong, and the selections are truly international.

Session 2 of “The Meeting Place” portfolio reviews for 2016 had its highlights. Best was Judy Gelles and “The Fourth Grade Project” which is bright, coherent, meaningful and wise.  A mini-visit could include (alphabetically) Michael Borek who had droll Washington D.C tour bus advertising appropriations; John Chakeres with “Structures” wall studies; Alejandro Duran with “Washed Up: Transforming a Trashed Landscape”; Vadim Gushcin with minimal table top still lifes (homage to Malevich); Dennis Hodge with “Eyedentities”, more sly appropriations; Miho Kajoika’s restrained “And where did all the peacocks go”; Vladislav Krasnoshek and Sergiy Lebedynsky’s black and white Ukrainian revolution work; and Peter Molick’s “Crossings”, gridded aerial drone photographs.  All well done and worthwhile.

Even the “Fine Art Auction” offered a thoughtful cross section of works by a range of exhibitors from Turkey’s Ferit Kuyas’ Chinese ferry to Toronto’s wonderful Elaine Ling with an iconic Baobab tree from Madagascar.  The auction presented collectors with a unique opportunity to trust their instincts about works new to the marketplace.

A special note is that Steven Evans, Fotofest’s Executive Director, has done the seemingly impossible job of moving into a role supportive of founders Wendy Watriss and Fred Baldwin, managing to honor and sustain their presence and legacy while establishing his own identity, artfully asserting his own taste and intelligence without laying waste to theirs.

We may have hurricanes and tornados as the world tears itself apart due our shortcomings as caretakers, but we can look forward to vibrant, meaningful celebrations of photography every other year with future Fotofests.