The Unseen Eye at Doug Dubois “In Good Time” at Aperture 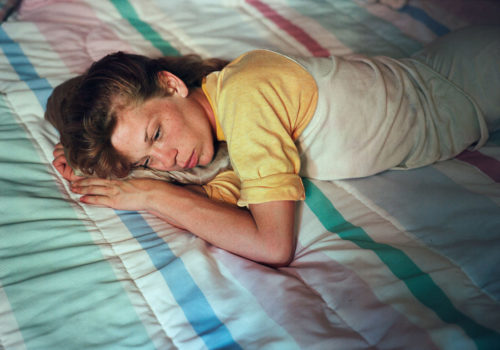 Doug Dubois makes photographs that other photographers only wish they could make.

It has been twenty five years since Peter Galassi’s “The Pleasures and Terrors of Domestic Comfort” debuted at the Museum of Modern Art. From the 1991 press release:

“Mr. Galassi suggests that artists began to photograph at home not because it was important, in the sense that political issues are important, but because it was there–the one place that is easier to get to than the street. After they had worked for a while, many also realized that the overlooked opportunity was also a rich one, full of uncharted mysteries. In Doug DuBois’s family photographs, such as ‘My Sister Lise, Christmas Eve (1984)’, moments that only an insider might notice are rendered with an intimacy that only an insider could possess.”

Doug Dubois, The Insider. That would probably give him a laugh.

Mr. Dubois’ photographs are in color and wonderfully considered. The mid-career retrospective “In Good Time” at Aperture is long overdue because Dubois is an under celebrated and terrific artist. You look at these images and maybe think “nice”. No. These are private with sad, weighty truths; these offer a report on living. People are attractive, yes, but real: often tired, sweaty, bruised, even bloodied.

This work is about terror more than pleasure.   For all of their fine record of seemingly conventional life with his good looking American middle class family, or his grandmother’s coal mining town of Avella, Pennsylvania or his Irish tribe of young people, there lurks something somewhat mean and dark, just below.

This will seem like overstatement but any sense of dread that Stephen King’s Carrie might reach out from the grave and grab you is the subtext here. It may, in fact, be the text. People are unsure, tentative, scared. Psalm 54:4: “My heart is in anguish within me, And the terrors of death have fallen upon me.”

The artist explains that an intimate photograph is made, not simply captured. “In the end, we may come to the conclusion that intimacy cannot be photographed directly (as we experience it) because, quite simply, the camera is always in the way. The trick, perhaps, is to understand intimacy as an imaginary space—an illusion that exploits our very real longing for a profound and authentic encounter with another.” (Interview with Alec Soth, “Conscientious” 2007)

He seems to work from a place of isolation, with the tension between intimacy and detachment, and he is curious about our own sense of our limits and our potentials.

He works for very long stretches of time, His “All the Days and Nights”, published as a book by Aperture in 2009 is about his immediate family, and it took over twenty years to complete. His newest series, “My Last Day at Seventeen” (Aperture 2016), is about kids coming of age in the neighborhood of Russell Heights, in Cobh, Ireland where a month-long residency turned into a five-year project.

“In Good Time” has been thoughtfully curated by Cory Jacobs and presented by The Hermès Foundation and Aperture Foundation. This excellent and worthy retrospective will be on view at 547 W. 27th St., 4th floor through May 19, 2016. Go.