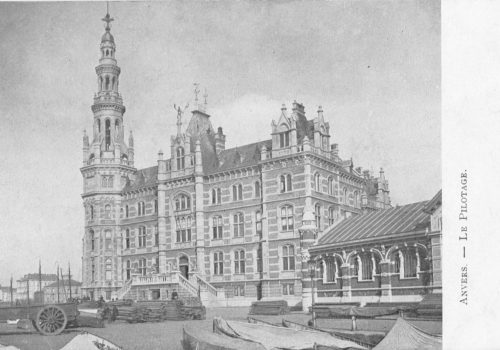 AntwerpPhoto is now in its third edition, and once again in the emblematic Loodswezen (the Pilotage) on the banks of the Scheldt. Perhaps for the last time in the eclectic neo-renaissance building from 1895, as the monument is being renovated and will become the epicentre of Antwerp fashion – but in any case, lets have a look at this edition.

AntwerpPhoto does not select photographers according to a theme, but brings together good photography under the curatorship of Kaat Celis. Also in this edition, a new contribution from IconoBelge – a selection of Belgian photographers on the theme of portraits, a retrospective of Jimmy Kets, a special exhibition by Erwin Olaf, the collaboration of Finbarr OReilly and Congolese photographers on the theme Congo In Conversation from the Carmignac Foundation and finally the end-of the year exhibition of the St Lucas Academy in Antwerp. A brief report on each of these:

I noticed Jimmy Kets in his early years already as a somewhat cheeky photographer, with an air of youth and self-confidence, and a quirky visual language. But above all, a photographer to watch. Today, he has moved away from photography: he no longer creates his own work, he just accepts commissions, and that’s how he likes it. At the same time, I discover a more mature photographer, with images that have gained in intensity, emotion, humanity and empathy. The portrait of Robbe De Hert, director; that of Matthias Schoenaerts, actor; John Crombez, politician; but also the anonymous images: the nurse in the Corona ward, the rider in a gallop race; and animals – the real-life image of a dead animal in an animal crematorium in juxtaposition with the image of a far-right populist figure.

For this edition of AntwerpPhoto, a first portfolio has been published, dedicated to Jimmy Kets. A beautiful publication that is available exclusively at the exhibition and via [email protected] The images are beautiful and large, and are a good representation of the exhibition. It is only in Dutch and English, in my opinion a wider audience could be reached by publishing it also in French.

Erwin Olaf’s contribution to AntwerpPhoto is a small but beautiful exhibition called April Fool 2020. At the beginning of the Corona crisis, Olaf was making a major revision of his image of society. Like many of us, he did not know that an event of this magnitude could happen: a world that stopped turning, a paralysed economy, the deserted streets of metropolises, towns and villages, the reactions of human beings who accumulated the craziest things, the feeling of ‘us against them’. Olaf portrayed himself in a madman’s cap, he felt – like all of us – humiliated in his solitude. A word of caution: when they saw Olaf on the poster, some visitors expected a retrospective and were a little disappointed. It might have been a good idea to point this out more clearly – but then again, does the public read?

The photojournalist Finbarr OReilly has focused on the Congo DRC in ‘Congo in Conversation’ and received the Carmignac Prize. He wants to break the European-centric image: he invited a series of Congolese photographers to document the situation from the inside. I admired the images of Justin Makangara, Arlette Bashizi and Raissa Rwizibuka in particular.

We have selected an image by the founder of Belgian documentary photography Patrick de Spiegelaere (1961-2007): Karoly Effenberger’s strong portrait (1972), a portrait of the young talent Eva Faché (1994), an image from Cedric Gerbehaye ‘s (1977) series on Latin America, a portrait from Bart Heynen’s series on gay fathers (1968) (to which we will certainly return), the frightening image of Masjid Mohadjerin (1976), a haunting image by Jan Rosseel (1979), the inhabited portrait by Sébastien Vanmalleghem (1986), and finally an image by the unjustly unknown Jan Yoors (1922-1977), who is every bit just as good as the greatest photographers.

Finally, there is the end-of the year exhibition of the students of the St Lucas Academy in Antwerp. We have selected four photographers there: Kris Riem, Alix Spooren, Luka Vandercruyssen and Anouck Volckaert

Exclusive publication only available at the exhibition and via [email protected]:

Other venues in Antwerp:

The excellent exhibition on Issei Suda in Fomu till 03 10