The Stash Gallery : Sarah Lee Lewis and Iain McKell : The Teenage Self 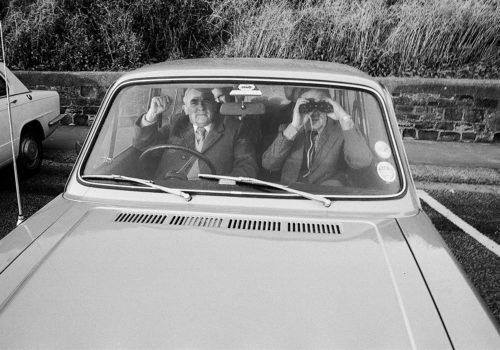 The exhibition is called: The Teenage Self.
It brings together 2 photographers: Sarah Lee Lewis and Iain McKell.
It is the latter that we have chosen to present to you.
He gave us this text!

Private Reality – A Diary of a Teenage Boy

In 1976 aged nineteen while studying at Exeter College of Art I got my self a summer job on Weymouth seafront photographing holiday makers. I saw this as a wonderful opportunity to earn a living but at the same time doing a personal project showing the life of the sea side photographer.
Its about youth culture and being a teenager in the 70’s. Existential angst was preoccupying my thoughts.
It all came together through the lens as I was turning from a teenager to a young adult.
As well as the holiday makers I was photographing local people from the town, my friends, family and into the evening with the disco bars fair grounds and caravan parks.
I was also experimenting with abstraction through the graphic nature of photography.
It was my right of passage and coming of age and I started to look at the world through the camera.

I saw these people in there cars, It’s a very British thing to do to drive to the sea side and (most probably because of the bad weather too) not actually get out the car but sea view gaze from with in that window. Its a bit like a camera you’re in a box looking out detached from the world taking in your experience.

So that observation and the inherent interest in my world around me along with my sense of humour and it was 1976 the year Punk hit the tabloids and Johny Rotten swearing on TV, youth culture was spitting at every one and doing V up with there fingers  `I was a bit of a punk more in attitude than dress but it was I thought a bit ‘Catcher in the Rye’ by J. D. Salinger (a quote from google)  ‘adolescents for its themes of angst, alienation, and as a critique of superficiality in society’ My friends at the time loved t˙is book  I had the balls just to confront the people in there boxes and photograph them in the name of free speech and being rebellious, seeing the irony and humour and how they were maybe trapped in there cars and there lives. By doing this I was catching there unguarded reactions to what I was doing like utter surprise or confusion on their faces. I think it was punky a bit passive aggressive but harmless. Although the women you see getting out her car with the glamorous sun glasses and partner smiling  came towards me and started hitting me with her hand bag saying ‘You can’t just go around photographing people without asking them’ but off course you can in a public space. I think I was like Ringo in Hard Day Night  Beatles movie. Maybe I was escaping my reality rather than confronting it or its both.