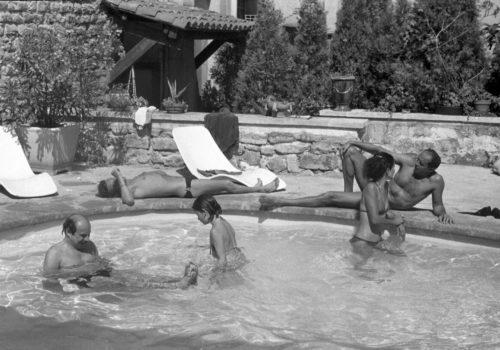 As soon as you see the first two exhibitions of Luma: James Barnor and Arthur Jafa: you understand: the scenography is sublime and the presentation perfect, Arles has entered contemporary art and we have just changed eras.

The city breathes this change. Every day, houses, apartments, buildings change owners. This week, half of the city was under Airbnb status and 115 shops had turned into paying galleries.

300 meters from the Place du Forum, the Korean artist Lee Ufan has transformed a private mansion into an ultra-modern Foundation to the glory of his works and for the past 9 months, foundations of all kinds have been organizing conferences and various social events!
We no longer come to meet people, we come to show off and make money.

The Off of the good old days, broke, hippie style, friendly is dead. This second leg of the festival, messy and sympathetic, is now buried not far from the tomb of Lucien Clergue.
In 2017, the reading of the Portfolio was 4 euros at the Archeveche where Christophe Laloi had installed his Free Republic. Today in the official theater: it’s 200 euros.

In its very operation, the festival has changed. The decision-making centers are multiple.
Luma, the Capitani, the Ortiz Foundation, the major associated centers decide their programming themselves.
Overall, this year’s programs were often brilliant: L’Avant Garde Féministe, Mitch Epstein, Frank Horvat…
An exception: the ridiculous catchall of the exhibition of the patsies sponsors of the church of the Frères Précheurs.
We can also say that book publishers deserved better than the 3 dilapidated patronage rooms in sweltering heat and probably multiple Covid nests.

The other photographic genres were relatively absent.
The strongest images of Ukraine are not in an exhibition but in a newspaper whose author Eric Bouvet sells in the streets!
It is also curious that Salgado’s gigantic exhibition at the Palais des Papes in Avignon was not included in the program.

Fortunately on a daily basis, the essentials were still present, the Pictet party at the Hotel Particulier, Franck’s dream meals at the Galoubet, the Nord Pinus terrace, the Capitani’s Tuesday lunch and Damien’s rickshaws.

At the end of the week, I realized that I was starting to plagiarize the: I remember Perec.

I remembered the wonderful lunches of Maryse Cordesse.

I remembered the childish complicity of Doisneau and Cartier-Bresson.

I remembered all the female breasts in the world of photography from the 70s offered to the sun around the swimming pool of the Forum.

I remembered a few adulterous desires that never materialized because I always had my 2 sons with me.

I remembered the fascinating anecdotes of Lucien Clergue.

I remembered the first magical year of François Hebel.

I remembered the screening in the ancient theater of Roméo Martinez on the 1930s and where, at the end, there were only 3 people left: Roger Thérond, Sam Wagstaff and Robert Mapplethorpe.