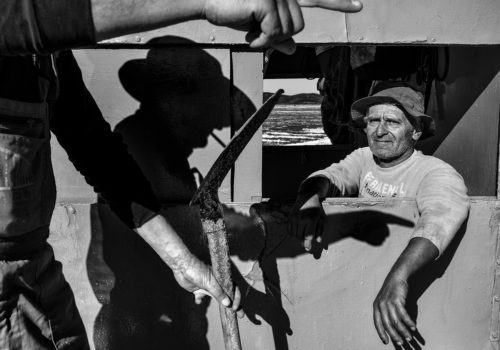 Between Light and Shadow

Nikos Aliagas is not the type to like routine. A true jack-of-all-trades, the journalist and radio and TV host with undeniable popularity, has since 2012 revealed to the general public his passion for photography. A passion that goes back to his childhood and that  he for almost 10 years transformed into a real addiction for our greatest pleasure. He for whom being a good photographer means not having certainties, also explains that a photo is first a story of connection and possibility, it is to feeling before capturing.

In this universe of light and shadow, his images, worthy of the greatest, have a timeless dimension and are both full of lightness and depth.

It is on the occasion of his exhibition on the grids of the square of parisian Town Hall through which he highlights “Parisian women” (35 unpublished black and white pictures) that Nikos agreed to play the game of our “Questionnaire”.

After the roof of the Grande Arche, the gates of the Palais Brongniart, the Conciergerie and the Louvre bookstore, this 5th exhibition in the City of lights -which the photographer considers a stage set he uses with the same pleasure-, pays tribute to the daily life of the discreet women and heroines of his native city (he was born in the 11th of Paris). To do so, he observed them, and often took pictures of them on the spot as he likes to do, never intrusive, always respectful… So don’t hesitate, go on the Metro line 1, make a stop at Hotel de Ville and let yourself enjoy it.

Nikos Aliagas : When I discovered in a shoebox some black and white family photos. My parents were very young, I was a child. I understood at that moment the power of the inexorable passing of time. That’s why I started to photograph, to “steal from” the time all those I loved.

The man of images who inspired you?

Nikos Aliagas : It’s a woman, Sabine Weiss. An immense photographer. Her humanity moves me all the more because she is detached from any posture. Sabine Weiss is one of the main representatives of the French humanist movement in photography, alongside Robert Doisneau in particular; she has seen everything, heard everything, known everything, even if she does not boast about it. Her eyes are like her images, tender and deep.

What image would you have liked to make?

Nikos Aliagas : There is a photo by Willy Ronis in the 50s that touched me a lot, the one of the “Silicosis miner”. A man in his forties who looks twice as old, behind a window. He is sick, hard hit by the work at the mine, there is no hope in his eyes. But there is no lament either, he smokes and waits for his time. I would have liked to have photographed him so that he would be remembered.

Nikos Aliagas : The “smiling shot” picture of the French resistance fighter Georges Blind, he smiles in front of a Nazi firing squad. He is alone in the world, he has no hope and yet he smiles. In reality, we will learn later that the Germans had organized a fake execution to break him. Georges Blind survived but was deported to the death camps. We know nothing about the photographer, but the image moves me because it is stronger than all those he captured then. It survives them and will survive us.

Nikos Aliagas : Not to have any certainties perhaps. It is the photo that comes to the photographer, I sometimes have the impression that it already exists somewhere in another dimension… It is first of all a story of connection and possibility. There is a lot of invisibility in an image, but you have to feel it first before capturing it.

Nikos Aliagas : I don’t believe that perfection is the first criterion of a photograph. I always give priority to emotion over the perfect image.

Nikos Aliagas : The fixed focal length without any doubt. 35mm, 50mm or 85mm.

Nikos Aliagas : It’s also my own fault, when the majority tells me not to go, I go. There is always a way to learn. And maybe understand.

Nikos Aliagas : An owl? That of Athena. A little wisdom in a cynical world.

Nikos Aliagas : Traders… I don’t understand anything about the money business.

Nikos Aliagas: Running barefoot behind a Hindu procession carrying a god. It was raining like crazy, I was soaked and full of mud in a village in Sri Lanka. But I was happy.

Nikos Aliagas: Not having more time to go abroad for long photographic journeys.

Nikos Aliagas: Instagram to try and tell a story of this shared moment.

Nikos Aliagas : Black and white definitely. Color is a journey I haven’t explored yet. The timelessness of black and white pushes us to keep only the essential in a frame.

Nikos Aliagas: Daylight is preferable or fixed light in the studio.

Nikos Aliagas : Neither, I would ask him to lend me his light. The real one.

Nikos Aliagas: A mask. A face on a screen while teleworking. And some hydroalcoholic gel.