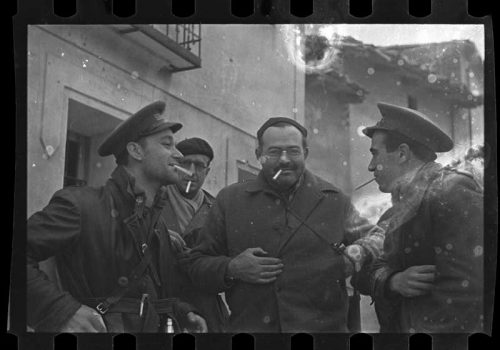 Lost since 1939, the Spanish Civil War pictures taken by Robert Capa were presented to the International Center of Photography in 2007. The mysterious “The Mexican Suitcase” and its negatives, exposed at the New York museum last September, are headed for Arles.

They were often evoked in the world of photography. In May, 1936, Robert Capa created a new photographic approach, close to men at war. The initiator of a new field, he sent certain pictures, now photojournalistic, to the magazines Vu and Regard who publish them. But he kept a few rolls of negatives in a small box. The two photographers who were with him, Gerda Taro, his companion, and David Seymour, known as “Chim” would do the same.

Capa, then a revolutionary, returned to his Paris home to meet with his friends. In the Spring of 1939, when the Germans entered France, he gave his negatives to his assistant Imre “Csiki” Weisz and left for New York. Since then, without any trace of contact sheets, rumors circulated.

At the end of 2007, three boxes containing the famous negatives were delivered to the International Center of Photography. From Mexico, they had been recovered by Benjamin Tarver, a Mexican filmmaker who, in 1995, had inherited them from a friend of his uncle: General Francisco Aguilar Gonzales, the Mexican Ambassador under Vichy who brought them to Central America. Until then, Cornell Capa, the great photographer’s brother and museum founder, worked hard to recover them, sending out a search warrant to the photographic community in 1975.

When the “Mexican Suitcase”, lost for more than half a century, returned “home”, the ICP curators discovered a historic treasure of 126 negative rolls containing more than 4500 shots. It was in fact the contents of three suitcases that would bring to light the Spanish civil war as seen not only by Capa, but also by Taro and Chim. Together, they represent a priceless account of the innovative activities of these three photographers and their incredible documents of this 20th century conflict. “Chim’s work is, above all, an incredible discovery” says Brian Wallis, current director of the ICP. “We knew Capa’s pictures, of course, but his had never before been revealed.”

The majority of the pictures were taken between May 1936 and 1939, when the failed revolution ended. Robert Capa’s pictures showed, among others, the battle of Teruel and Rio Segre, the defense of Barcelona in January, 1939, and the exodus of populations from Tarragon and Barcelona towards the French frontier. After his accidental death by a Republican tank on July 25, 1937 during the Battle of Brunete, Gerda Taro also chose to document Civilian army training camps, taking lively battle pictures. As for Chim, his negatives reveal a certain aesthetic in his portrait work, noteworthy for the familiar picture of a nurse carrying a baby in Estremadura. His suitcase also included documentation of the complicity between Taro and Capa at a Parisian café. “Pictures without gimmicks”, exclaims Wallis. Among these long awaited pictures are also a few rolls of film that had no connection with the work in Spain: a series of pictures taken by Fred Stein in 1935, and another by Capa in Belgium.

Two years of restoration work were required before the ICP was able to expose these pictures. The negatives, in “remarkable state”, according to Wallis, were delicately scanned one by one without being touched by human hands. This discovery allowed photography curators to better understand Capa’s work techniques, his evolution, the identity of each photographer and the relationship between Taro and Capa. “We had seen some of these prints, but with the negatives, it was possible to see the variations between each shot and their context” explains the ICP director. Considering the amount of negatives restored, they hoped to find the series related to Capa’s controversial “falling soldier” of a Spanish soldier falling under gunfire. “Finding the pictures surrounding this one would have allowed us to determine whether or not the picture was staged,” commented Brian Wallis. “Unfortunately, the picture was not taken at the same time or place as those in the Mexican suitcase. In the future, we will certainly discover the truth with other materials that remain hidden. It is still a mystery.”