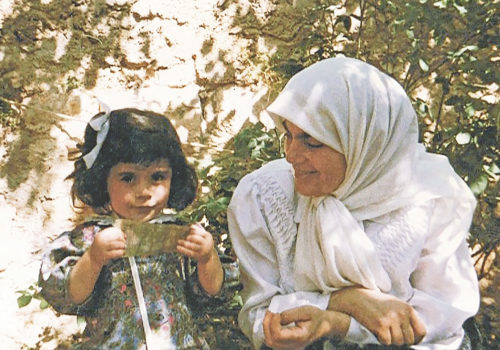 Atelier EXB is releasing a book with a singular concept that brings together intimate photos of Syrians in exile. An initiative by photographer Alexis Cordesse who wanted to question the use of pictures for those who fled the war.

It all started with a pink ribbon. The one that Nour, a teenager, tied around a bundle of photographs, then took with her in her flight, leaving her country, Syria, affected by the very heavy armed conflict which has been taking place since 2011. In haste, when she gathered her things together, in the choice to keep or not such a thing, she felt the need to take with her these pictures, those of her life until then, those of the happy days some time before the war and those of the first difficult moments at the beginning of the conflict.

They then crossed Europe, followed her in France and ended up reaching the ears of Alexis Cordesse, a photographer who, after years of photojournalism working for the French press, carried out other documentary work, long term projects. During which  he developed a reflection on ethics and aesthetics , particularly regarding his work on the Rwandan genocide.

Intrigued by this story, he asked to see the photographs and then discovered another face of Syria, far from the one that has been seen for years in the press and on social networks and which ended up creating a full-fledged image, of which we all have a vague idea, fed by the damage of the conflict, whether it is the suffering  inhabitants or the crumbling buildings in the cities, in the middle of a gray atmosphere resulting from the dust of the debris and the immediate violence on every street corner.

Tens of thousands of images

Like an aside in this endless mass of images produced in the Syrian context, the photographs chosen by Alexis Cordesse emerge as so many relics which celebrate a life in spite of everything, underline the beauty of things in spite of the surrounding disaster, recall the present splendor. still existing in the country and come to deconstruct received ideas. “At the beginning of the book, for example, I chose to put the photograph of a field covered with tall grass in order to show that Syria is not only the desert and arid terrain that we see in Daesh videos. », Explains Alexis Cordesse, who collected these images for about two years, questioning acquaintances who helped him meet various Syrian exiles. In all, nearly eighty meetings. After viewing tens of thousands of images, pulling out 2,800 in a first selection, he then had to choose just 50 for the book. A refined work that goes completely against the profusion of images in the context of the war and gives value to the photographic gesture just as much as it makes us aware of what is happening in the country. Alexis Cordesse believes that these images kept of the private sphere allow us to feel much closer to a Syrian culture about which we have been able to develop many clichés, especially because of the colonial period which suggested that our cultures would be further apart than they really are.

By realizing that an image sometimes has the same status as a space of memory and as much is a celebration of the beauty just like in European countries. The lives of these Syrians suddenly seem more similar to ours, as much as a part of them are told by short texts written by Alexis Cordesse in the form of portraits taken from life. Behind the scenes, also the moving thought that these images are the “survivors” as Alexis says of a multitude that has been destroyed, burned, lost in the destruction or quite simply erased before a terrible checkpoint when what you have in your cell phone can be used against you. In fact, many  have lost their lives for this confides Alexis Cordesse.

And this is the strength of these photographs which reveal by ricochet the tragic reality at work in the country and give a luminous “side” to it. For example that of this group of friends who pose in front of the camera, happy to be together. When Alexis asked the image holder what had happened to this or that cheerful-faced person, the latter gave him a chilling story, contrasting with the smile forever preserved in the photograph.