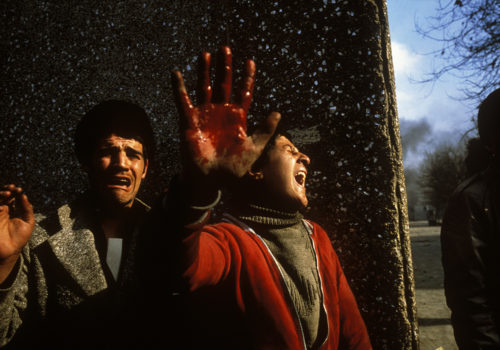 Forty years ago last month, Olivier Rebbot died in a Miami hospital at the age of 31 after being shot in El Salvador — which by itself is reason enough to remember the French photographer. But this year, when assaults on the press were legitimized from the top down and, quarantined, we found ourselves in a war on truth, it’s worth looking back to the story of this dashing young knight of magazine journalism not simply because of his death, but also because his life exemplified the antidote to misinformation and lies: being there.

Here’s some of the “there” where Olivier, Zelig-like between 1973 and 1980, was: covering revolutions in Iran and Nicaragua, civil war in Lebanon, meltdown at Three Mile Island, blackout in New York City, Elvis Presley’s funeral, with Richard Nixon when he announced, “I am not a crook,” with Saddam Hussein in Baghdad, Qaddafi in Tripoli, Arafat in Beirut, Sadat in Cairo, and Pope John Paul II at Auschwitz. Arrested on the Mexican border. Beat up and jailed in Bolivia. Pinned down by gunfire in Managua. And so on… and on.

Olivier wasn’t particularly unique in this regard. There were maybe a hundred others like him, many of them his friends — a small cadre of adventurers roaming the world with cameras, mostly American or French, mostly male, and mostly white: the international photographic press corps.

Few of them considered themselves artists. To the contrary, “F8 and be there,” Weegee’s tight-jawed dictum on how he made good pictures, might have been their motto. But that was their power, and the power of news photography since the first illustrated newspapers rolled off the presses in the 19th century, — that it puts the viewer where the photographer is standing. And as we saw on January 6th, when a MAGA hat-wearing mob rampaged through the US capitol, revealing the violence at the heart of Trumpism, there’s a difference between believing something and seeing it with your own eyes. Just as in Olivier’s day there was a difference between reading about the growing anti-Americanism in Iran and looking into the eyes of the American ambassador William Sullivan as an Iranian militant held a knife to his throat. Or between reading about the Salvadoran Death Squads and seeing a picture of a pile of naked bodies outside a makeshift morgue.

But besides courage, “being there” takes a certain skill set, cleverness or persistence or, in Olivier’s case, the ability to charm. This explains something of the outsized, swashbuckling nature of this group. And by group, I mean Olivier’s friends and colleagues, which included David Burnett, Alex Webb, Peter Howe, Arthur Grace, Matthew Naythons, Catherine Leroy, Raymond Depardon, Susan Meiselas, Patrick Chauvel, and many others, a cast, by and large, of self-made characters who, like Robert Capa, the patron saint of photo nomads, reinvented themselves behind the lens. Olivier epitomized the type. An exile, a pied noir raised in Morocco, Algeria and France, with no real sense of belonging. Separated parents. A high school dropout who at the end of 1971, broke and hopeless, left Paris for New York, where he suffered and scrounged. A nobody from nowhere whose images, by the end of the decade, would be seen around the world.

Then as now timing is everything in photography. And Olivier’s couldn’t have been better, arriving in New York with the rise of color photojournalism, when newsweeklies had loads of page space and big budgets to pay for as many pictures as it took to fill them. Maggie Steber, just starting out then, recalled a joke photographers used to share about Time magazine, “that the picture editors would go to work and when they arrived they would throw a window open and throw ten thousand dollars out the window, then shut the window and get to work.”

If today this image of an army of cowboys with cameras and per diems parachuting into trouble spots seems to belong to an outdated, quasi-colonial mentality, then consider the flip side: Rebbot’s long-term assignment-less exposé on child prostitution in Times Square, where he photographed boys as young as eleven being pimped out a stone’s throw from the New York Times (a newspaper that, like almost every other publication in the world, refused to publish it). Consider, too, that the big story the week he was mortally wounded wasn’t Salvador, but the inauguration of Ronald Reagan in Washington, D.C., where most of his friends were, so that his decision to journey to a Central American heart of darkness where four American churchwomen had just been raped and murdered wasn’t exactly jumping on anyone’s bandwagon.

Some years back, when I was interviewing Raymond Depardon, who had worked beside Olivier in Lebanon, he asked, rhetorically I supposed at the time, this question:

What is the function of Olivier Rebbot?

The odd thing about the question was that he had posed it in the present tense. Not what was the function, but what is the function. Today. Right now. As photo agencies were just then collapsing around us, this was no idle thought experiment. In those days you could see slides spilling out of torn black garbage bags onto midtown New York’s sidewalks, and photo editors, in a kind of image triage, hammering nails into stacks of Kodachrome — stakes through the heart of the past.

As an editor at Contact Press Images, where Olivier’s images had been kept since his death, I ultimately realized that those decisions were, in some small, way up to me. And so in 2010, after helping put together David Burnett’s memoir of the Iranian Revolution, 44 Days (a book in which Olivier’s impish face kept popping up, and that was awarded the Overseas Press Club of America’s Olivier Rebbot Award for Best Reporting from Abroad), I decided to take a closer look at his work. In a back room on the 7th floor of an office on 38th Street, I gathered Olivier’s archive, contact sheets, slide boxes, tear sheets, letters, prints — all of which fit neatly into six banker’s boxes — and dove in.

Oh, how I wish I could convey that irreproducible sensation (and one few will ever have again) of taking the lid off that first box, the explosion of images shuffled by time, the vibrancy of life unphotoshopped and uncurated — an experience so intense that I would spend the next five years traveling around the world to try to contextualize the material and understand how Olivier fit into the bigger picture of 1970s photography. Only I was asking the wrong question, it seems to me now, was asking what was the function instead of what is the function.

As for this newer formulation, today I think the answer is clear. As Patrick Chauvel, who worked with Olivier in Iran, put it: “I think it’s important to tell the story of Rebbot because he’s an example of the way these young people, full of life, believed in what they were doing and went all the way.”

Our tastes, they say, are formed in childhood. And when Olivier died in Miami, I was fifteen miles away, a sixteen-year-old who took pictures for my high school yearbook, had a darkroom in the garage, and regularly clipped articles from Newsweek for my debate team files. Which is how I first saw Olivier’s pictures — without ever knowing who he was. Just like I saw David Burnett and Arthur Grace in television ads for the Canon AE-1 (“So advanced, it’s simple”). In the wave of post-Watergate idealism, without being fully aware of it, they were my role models, the ones who lured me into journalism and shaped my ideas about it: that it was a mission (though you’d never say so), that you went to war to prove yourself, and that, although you were an outsider, with a camera you could be at home anywhere. All you had to do was be there.

A documentary on the life and work of Olivier Rebbot is currently in post-production. A gofundme campaign has been created by Sylvie Rebbot, Olivier’s sister ex director library Magnum Photos, director photography magazine GEO contributor L’Oeil de la photographie , to help finance its completion. You can contribute at  https://www.gofundme.com/f/cacjec-olivier-rebbot-documentary-fund