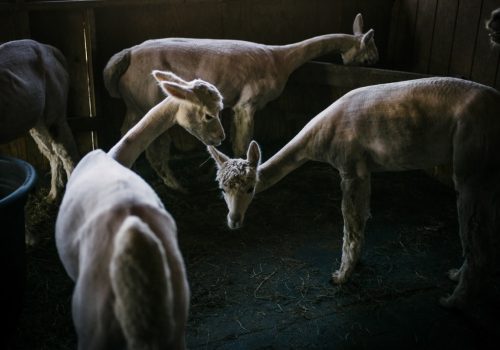 With the title of his series The Kingdom, Stéphane Lavoué, right from the beginning, puts us in a double reality. It is a very concrete “kingdom”, that of the Northeast Kingdom, a region of lakes and forests in the northeast of Vermont, one of the least populated states in the United States (twelve inhabitants per square kilometer). However, it is also a fictional territory constructed by his photographs, a country of melancholic haze inhabited by unique figures, each seeming to reign over their own world, reawakening the dreams of Henry David Thoreau, who, close by in Maine and Massachusetts, lived a life of rebelliousness and fusion with nature in the 19th century.

After having discovered this region through his Bostonian friends who had moved there, Stéphane Lavoué decided to explore its confines, going to the very ends of paths, to lakes in hills, and from farm to farm in search of this land’s “royalty”. Here, the harshness of the climate (icy winters, scorching summers) coincided with that of the inhabitants forced to be self-sufficient in response to industrial decline. The former Vermont of traditional farmers and republicans is still present, but they coexist with a more recent population of hippies from the 1970s, Vietnam War deserters, artists, and idealist farmers coming in search of a more liberal and atypical way of life.

In these photographs, reality is comprehensively imposed, particularly through the subtle work on light, colors, and textures, but each image also seems to be woven out of fiction. Behind the landscape or portrait, a story begins to be told, a query born, sometimes concern. The sherif and his gun, the woman with an axe, and a teenager posing amongst the animals that she skinned are some of the strongly evocative figures that push the small villages of Vermont towards more obscure lands, like David Lynch who in Twin Peaks brought fantoms and nightmares into a small northern town in the United States. As for the immense and unclear landscapes, drowned in rain and fog, they lead us into somber reverie where the paths seem like they were made for getting lost. Our eye goes in and out between precise and blurry areas, as if the near and the far, the intimate and the limitless, became indistinct.

Perhaps it was enough, in a diner consistent with the American mythology, that a server said the magic formula “Welcome to the Northeast Kingdom of Vermont” so that the doors half-opened because, like Bruno Schulz said, “reality is a shadow of the word.” Unless reality is finally established from these images through which Stéphane Lavoué knew how to render the grander of a winter kingdom with unfortunate sovereigns, with princesses of a cruel beauty.

In the way it mixes portrait and landscape, this series could be part of a constellation of certain contemporary American photographers (Alec Soth, Lucas Foglia, Todd Hido, Bryan Schemata…). It presses on that which is at the base of the American dream: the encounter between a population and a territory and the manner in which they interact. The beings are shaped by their relationship to nature and wildlife. In return, the landscape is impregnated with what is at the heart of human existence: desires and dreams, the aspiration to create a world. The “Kingdom” is, above all, this scene without limits where everyone plays their role. One eye opened to a bitter and tormented reality, the other closed to a dream filled with kings and princesses.

Bruno Nourry is an author specialized in photography. He lives and works in Nantes, France.