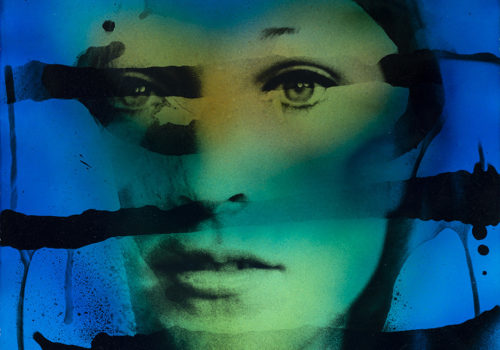 Staley-Wise Gallery presents the first major exhibition by Kali. The exhibition includes vintage photo-based artwork and original Polaroid prints. The majority of this work has never been seen publicly before.

Joan Marie Yarusso was born in 1932 and raised in Long Island, New York. Wed and divorced by the age of 30, she left her home and family for a new life among the hippie counterculture of California – and a new identity as “Kali”. While Kali had studied art and photography previously, no one knows exactly when and how her artistic practice and style developed. She began using an improvised darkroom in the bathroom of her Palm Springs home to print 16×20 inch photographs of her friends, pets, acquaintances, children, her children’s friends (including a young Cindy Sherman), and surroundings. Late into the night, Kali then used dyes, screens, and organic material in the swimming pool to layer moody and psychedelic abstractions over the photographs and dried the textured prints in the desert sun. Kali’s daughter, Susan, was tasked with retrieving the prints in the morning – after which they disappeared.

The social and political turbulence of the 1960s and 1970s encouraged a more experimental artistic counterculture in the Los Angeles area. In particular, artists such as Robert Heinecken, John Baldessari, Naomi Savage, and Ed Ruscha recontextualized photographs as “objects” open to manipulation – rejecting the more straightforward and classical approach of masters like Ansel Adams and Edward Weston. Kali was a prolific pioneer of this alternative photography and her vibrant images marry a bohemian sensuality indicative of the time period and her lifestyle with a more emotional spontaneity.

In the 1970’s, Kali continued her practice with the Polaroid camera. Instead of manipulating the Polaroid prints, she used multiple exposures and projections of light in camera to startling, eerie effect – particularly on a series of haunting self-portraits. Much later in her life, Kali documented her fascination with UFOs and extraterrestrials by monitoring and photographing images of flickering transmissions and unexplained streaks and blobs of light from the security cameras surrounding her property in Pacific Palisades.

Despite her prolific artistic output, Kali revealed her work to few and seems to have retreated just when she may have started to gain recognition. The only known article featuring her work was in the November 1970 edition of Camera 35 magazine and the author noted that Kali’s “Artography” (her trademarked name) was “was beyond the capabilities of mere machines. In fact, there is not a way to reproduce one of her images; as a result each of them is an original”. In her 90’s, Kali began to suffer the effects of Parkinson’s and memory loss. Susan helped her move in to a nursing home and at the same time discovered the immense collection of Kali’s artwork and writing. Soon after Kali’s death in 2019, the collection was organized and archived by Susan and Kali’s former son-in-law, photographer Len Prince. The many years of Kali’s once-hidden artistic life have culminated in the Emory University’s acquisition of the majority of her archive, an upcoming retrospective at the Columbus Museum of Art in Ohio in Spring 2022, a new four-volume book survey, and this exhibition at Staley-Wise Gallery.