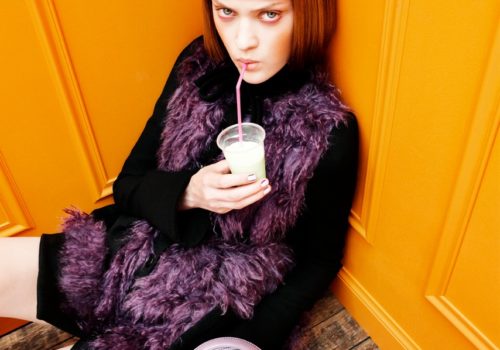 The career of Sonia Sieff began at the age when her father Jeanloup Sieff passed away. Since she was 20 years old, she hasn’t stopped. Here is a portrait of her, by Stéphane Brasca, Editor in chief of de l’Air magazine:

“I am returning to essentials”. The author of this pithy comment describing her upcoming project about female nudes is not quite old enough to share her life’s memories. With only 31 rapidly increasing Springs to boast. Sonia Sieff lives quickly. Eager to do and try everything, she is impatient, overworked, never satiated. On her motorbike, she makes tracks. Behind her lens, she has made a name for herself.

The daughter of Jeanloup Sieff, her photography career began when he died, in the year 2000. She was 20, and since, life has been in constant acceleration. After her remarkable beginnings in the press with her portraits of young actors, she took her pretty face and her cameras onto movie sets. A bit discouraged, she tried reportage. Which bothered her guilty conscious. “I really felt like I was stealing something”. Perhaps she was lacking the maturity, or self-confidence, to capture an emotion from people who hadn’t asked for anything. Perhaps she’d rather win the other’s confidence by magnifying them, by sculpting them.

Which could explain her move to fashion, a world where her talent reins like that of an orchestra conductor. “Choosing the lights, crops, working on time constraints, I love it!”. Fashion brought her advertising work on a silver platter. The jeweler Fred hired her talent, and the contacts (actors, musicians, singers…) she had gathered over the years. One of Paris’ most glamorous networks… In her portfolios (de l’air, Uomo Vogue) or in her ad campaigns, Sonia dares the super-production. While other photographers tend towards minimalism, she sees big. For a swim-suit series, she plunged a ballet of dancers into a pool. For a ready-to-wear brand, she occupied a train station. Sonia has no equal for finding the squat, workshop, or sublime apartment where her heroines can pose. Always beautiful, often with bushy eyebrows, at once savage and sophisticated. A self-portrait can be perceived through all of these works. A girl in love with her freedom. “That is what I inherited from my father, doing what I like and integrating that into long term projects, regardless of the medium. Like him, I don’t want to be in style, I want to hit where no one is expecting. It requires extreme self-discipline, and constant questioning.” Follows this series of female nudes after a series of male nudes. Men of all types, far from beauty standards, posing in very harsh light.

“Contrary to them, and to all I’ve worked on these past few years, I now want to work without any stylists, no makeup, no studios”. Sonia likes to burn what her former loves. She smiles. “It’s just an evolution, I don’t deny what I did. I am perhaps more confident about confronting a subject alone, in his universe. It is a difficulty I want to experience.” A necessary step, for her, to get to the ultimate art form, cinema. She has already made a few short movies, small steps towards the feature film she
dreams of making. “I started on the set taking pictures of actors. I will finish on the set as a director”. It is what her father never found the time to do. “He always talked about it, but didn’t take the Femis entry exam… I think he had neither the patience nor the desire to work on a team. That is our biggest difference.” It will be her way, then, to honor his memory, and to break free.