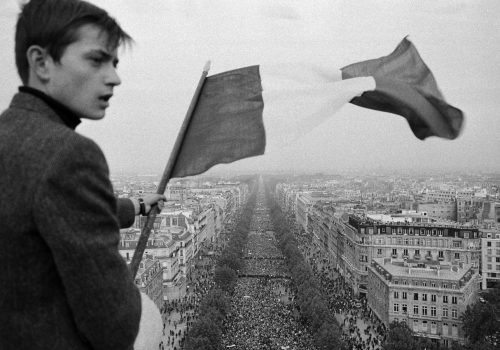 Fifty years have passed since May 68… No big deal for the generations who have no idea of the uprising against the established, immutable order of a society stuck in its old ways; against the France of Charles de Gaulle, proud and unwilling to come to terms with history, its own history. Like some despotic protector, de Gaulle seemed to be alone in the face of history. But the wars and the end of the colonial period were not an easy pill to swallow. In the town of Sète, the festival ImageSingulières features the pictures of the coverage of the events by the newspaper France-Soir.

May 68: let’s call it thus, even though these few weeks’ upheavals redefined the debates and had a long-term impact on France and abroad. Abortion, feminism, minimum wage, the employer’s role are among issues raised again and again. One could say that, in a brutal and provocative way, students at the time broached the questions of modernity and the future of society.

In order to illustrate this intense historical moment, the exhibition could have fallen back on available evidence, like Gilles Caron’s iconic face-off between a policeman and Danny the Red [i.e. Daniel Cohn-Bendit] or Claude Raymond Dityvon’s startling images; instead, however, the organizers preferred to access a more direct iconographic collection, one that would be more in touch with the events as they unfolded day by day in the month of May.

Just such a collection was uncovered thanks to the inestimable historical Roger-Viollet agency in charge of distributing the pictures. The collection in question belonged to France-Soir, a major daily newspaper at the time, preserved at the Bibliothèque Historique de la Ville de Paris. Some twenty photographers were employed by the journal to cover this turning point in the French national saga with nearly 25 thousand images. What do these documents tell us? That the confrontation between, first, students, then workers, and the police were not just a game of cat and mouse but a battle waged with unprecedented and now forgotten, violence. The provocations of a certain part of the young population were ruthlessly suppressed by the government of Georges Pompidou. It is this collection, invaluable and little known, that is being edited and valorized during the festival.