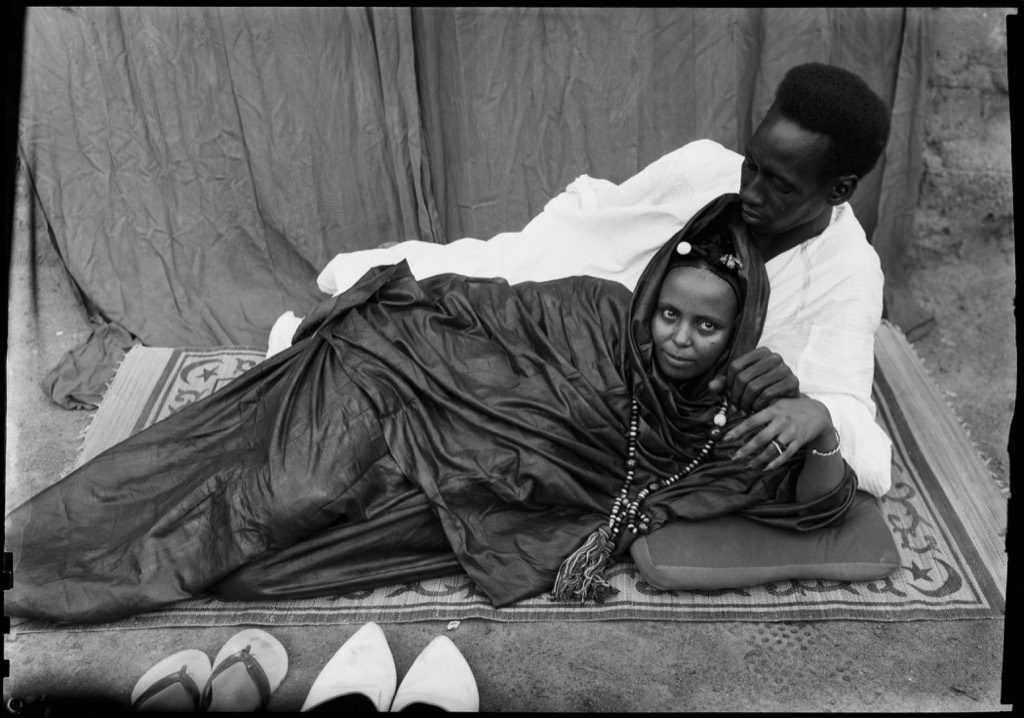 In 1991, Jean Pigozzi and André Magnin discovered the (uncredited) photographs of Seydou Keïta, who was then completely unknown outside sub-Saharan Africa, following their visit to the exhibition Africa Explores, 20th Century African Art at The Center for African Art in New York.  The two men headed the hunt to track down the author of the photographs. At Jean Pigozzi’s insistence, André Magnin headed for Mali, his first visit to the country. His driver took him to the house of Malick Sidibé (Soloba, Mali 1935 – Bamako, Mali 2016), the best-known photographer in Bamako at the time. When he saw the reproduction of the portraits Magnin had brought with him, Sidibé unhesitatingly exclaimed “That’s by Keïta! He’s still there, in Bamako-Coura, behind the main prison”.

Having retired in 1977, Seydou Keïta, who was born in 1921 in Bamako and died in Paris in 2001, was taken completely by surprise when he saw someone had travelled so far on account of the beauty of his images thirty years after he had shut his studio. His meeting with André Magnin, and then with Jean Pigozzi, would lead three years later (in 1994) to the photographer’s first solo exhibition, at the Fondation Cartier in Paris (France). Until that time Keïta had only seen his works in the form of the contact prints he made from the negatives. He later admitted, “You cannot imagine how moved I was the first time I saw the prints made from my large format negatives – flawless, clean, perfect. It was then that I understood that my work was really, really good. The people in the photos seemed so alive. It was almost as if they were standing in front of me in flesh and blood”.

This remark by the artist demonstrates his ability “to see and capture individuality”, as Robert Storr points out. In his essay on Keïta, titled L’immortalité en un déclic, the art critic was alluding to the practice the photographer had laid down for himself from the very start of his career in 1948: a single shot for each of his individual or group portraits. This approach, which was partly the result of an attempt to curb costs (photographic paper was rare and expensive in Bamako in the 1950s), and partly of an innate sense of how to find the right pose and composition, quickly set Keïta apart from the other African photographers then practising in Mali.

Seydou Keïta explained the reason for his success with his clientele. According to him, “technically, photography is simple, but what made the difference was that I knew how to find the right position, I never got it wrong. The face just turned away, the gaze being really important, the placing and position of the hands…. I could make anyone look better. In the end, the photos came out really well. That’s why I say that it’s art”.

Keïta explained that he always had to find new ideas to please knowledgeable clients as, at that time, having yourself photographed was still an important event in Mali, as in all of West Africa. Thanks to “innovations he introduced on the level of accessories, poses and materials, Keïta anticipated the wishes of his clients and allowed them to become what they wanted to be in front of a camera” The idea of being able to move above one’s social status through a photographic portrait was then very powerful. Keïta was one of the first to give expression to this aspiration by offering the use of accessories. For his photographs, clients could dress up from head to toe, make themselves elegant or dress in European style, something that really struck a chord with many men in Bamako. Women, on the other hand, though always stylish, more often stuck to their traditional sartorial styles. Were they perhaps demonstrating that they were guardians of African traditions in the urban communities of Mali, even as great changes were taking place?

In his studio, Seydou Keïta kept a whole range of objects that symbolised modern life: watches, pens, telephones, alarm clocks and other treasures that, when associated with the women’s make-up, were outward signs of prosperity, beauty or elegance. Some of his clients posed on a bicycle, a scooter or near a car – including those belonging to Keïta, which he had been able to buy from the proceeds of his studio – or with cars that were normally the prerogative of the Whites but which, for the time of a pose, allowed Africans to enjoy their privileges.

Music was another important “accessory” in Keïta’s photographs. It became blended into the portraits in the form of a radio set. The young clients who chose this symbol of the modern West were demonstrating to their entourage that they were informed about the latest events and musical trends.

Rhythm was made visible in another and unexpected manner with the use of patterned materials that bring life and vitality to the surface of the images. Seydou Keïta’s great innovation was to use rolls of material that he bought in Bamako, which he hung in front of the adobe wall in the courtyard of his studio. From 1948 to 1954 his fringed bedcover provided him with his first background. Later he used several fabrics, which he chose for the graphic power of their patterns and which he kept for between two and four years. It was these backgrounds that later allowed him to date his photographs.

One of the best examples of this admirable use of fabrics is exhibited at the Galerie Nathalie Obadia in Brussels, in which two women seem to float in a “sea of geometric motifs”. According to Dan Leers, “this accumulation achieves two objectives: regarding the composition, it creates a dynamic that keeps the eye of the viewer in movement within the field of the image; regarding artistry, it adapts an already old European tradition to the reality of Mali”.

Although there are precedents of Keïta’s technique in photography, there are some too in painting, for example, the Nabis. Vuillard in particular employed the superposition and blending of motifs and patterns in his paintings. However, it should be mentioned that any claim that Keïta’s compositions or poses were borrowed from paintings, such as that of the odalisque, are all without foundation as Seydou Keïta has always stated that he never owned any book, or saw any photograph that could have influenced his art. The only external factors that contributed to his work were technical. The fact remains that his work is recognised as part of the history of photography in Mali and West Africa, where a wave of African studio photographers appeared at the end of World War II and lasted until the 1960s.