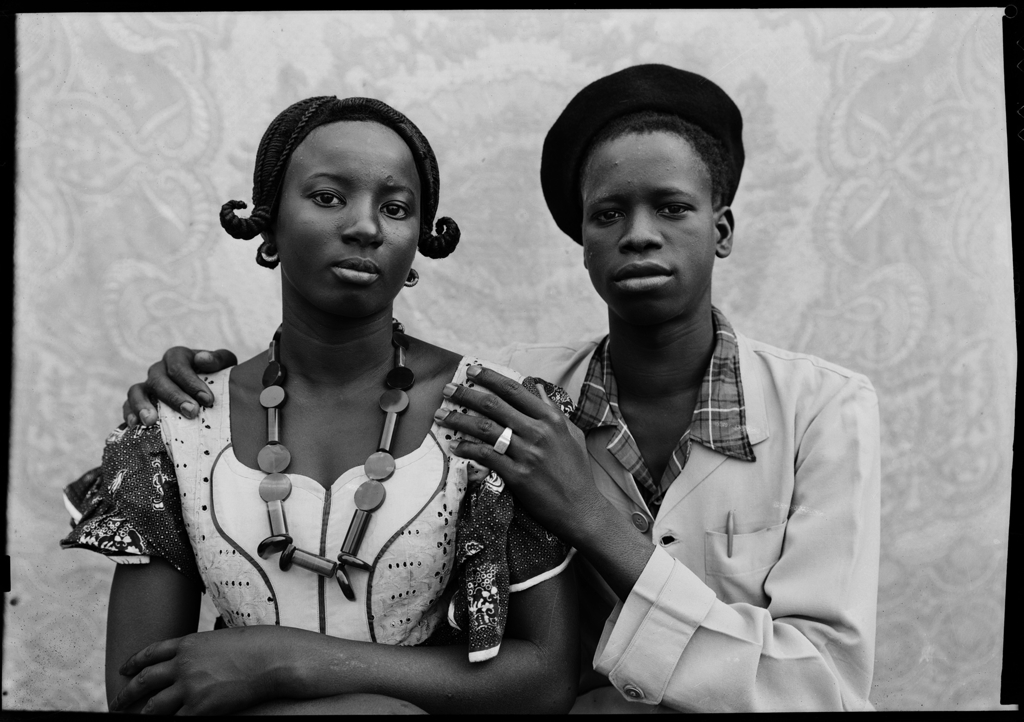 « Be photographed was a big event, we had to give the best picture of the person.
Often they look serious, but I think they were intimidated by the camera, it was new. »
– Seydou Keïta

Seydou Keïta was born circa 1921 in Bamako (then the capital of French Sudan). He did not attend school and at the age of seven became an apprentice carpenter to his father and uncle who, in 1935, gave him his first camera, a little Kodak Brownie.

By 1939 he was already making a living as a self-taught photographer, and in 1948, opened his studio on the family plot in a bustling district of Bamako, not far from the station. He specialised in portrait commissions, either individual or group, which he produced mainly in 13×18 format and in black and white, with a preference for natural light. The majority of the so-called «vintage» prints of the time were contact prints, from negatives, which Keïta produced himself. The paper was expensive and difficult to find. At the request of some wealthy clients, he occasionally produced 30×40 prints. More rarely still, he would colorise accessories, particularly jewellery.

Seydou Keïta simply loved photography and wanted to give his clients the most beautiful image possible. In most cases he would shoot them in bust-length at a slight three-quarter view, or standing, and used fabric backdrops with decorative patterns which he would change from time to time after a few years, sometimes re-using them. It was by using these backdrops that he was able to more or less date his images. With the first money he earned from his work, he bought «chic», Western-style clothing, accessories, small pieces of furniture, a radio and jewellery, as well as a car and a scooter, which he would graciously make available to clients so that they could compose their own picture.

Seydou Keïta rapidly became famous in Bamako, in Mali and in many countries in West Africa. The value he placed on his subjects, his masterful composition and use of light, and the modernity and inventiveness of his scenes brought him immense success. On 22 September 1960, the Sudanese Republic declared independence and Modibo Keïta became the first president of the Republic of Mali, establishing a socialist regime. In 1962, at the request of the authorities, Seydou Keïta closed his studio and became the official government photographer until his retirement in 1977. He died in Paris in 2001.

His work, which covers a relatively short period, provides an unrivalled testimony of the changes in Malian urban society, which emancipated itself from tradition and aspired to a certain level of modernity, with decolonisation underway and independence approaching.

Today, Seydou Keïta is considered one of the great photographers of the second half of the twentieth century, the equal of the most famous portraitists such as Richard Avedon or August Sander. Discovered in the West in the early 90s, he has since been celebrated around the world and exhibited in numerous museums and galleries. This exhibition is the first broad retrospective, bringing together an exceptional collection of almost 300 photographs, including modern b&w prints, 50×60 and 120×180 formats signed by Keïta, as well as some unique vintage prints.