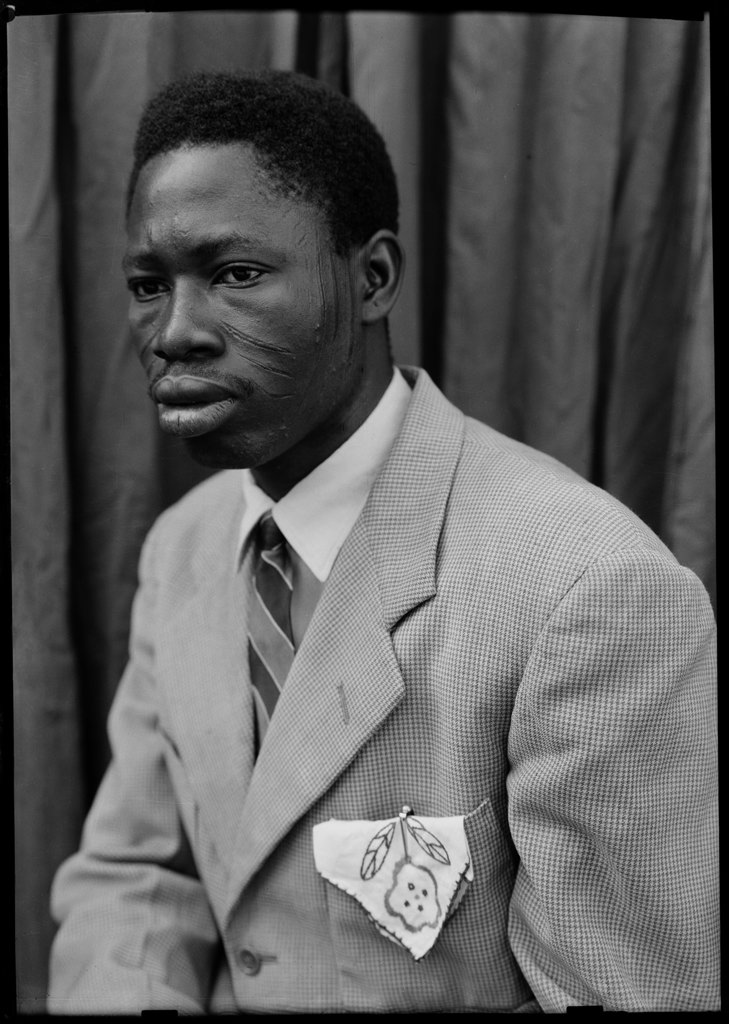 « I worked just as well with daylight as with artificial light.  Many clients preferred “night photos” which were paler, but I preferred natural light. »
– Seydou Keïta

How was your interest in African contemporary art born?  Was your search directed towards photography from the beginning?

My interest for contemporary art in Africa began in 1986, when I worked preparing “Magiciens de la Terre”, the first real international exhibition presented in 1989 at the Centre Pompidou and at the Grande Halle de la Villette. […]

I have to say that my true passion for photography was born when I met Seydou Keïta in Bamako in 1991.

How did you meet him?

In 1991, I attended the inauguration of the exhibition “Africa Explores: 20th Century African Art” organized by Susan Vogel at the Center for African Art in New York.  This exhibition mixed classical, traditional, modern, contemporary, and pop art and also showed some old photographs.  Some were credited “anonymous photographer, Bamako, Mali, 1950s, 1955…”  Jean Pigozzi, who discovered them in this exhibition, found them remarkable and faxed the catalogue images to me.  I had enough experience in Africa then to affirm that, if the anonymous photographer of these portraits was still alive, I would know how to find him.  So, I left for Bamako alone (as I do for all my travels) equipped with photocopies of three portraits reproduced from the New York exhibition’s catalogue.  It was my first trip to Mali.  A little after my arrival, I met Thairou, who became my loyal accomplice.  He drove me to a photographer known to all of Bamako, Malick Sidibé, whose only occupation then was repairing cameras.  Without the least bit of hesitation, he identified the photographer behind these portraits: “That’s Keïta’s! He’s still here, at Bamako-Coura, behind the central prison.”

And it was there, in his plot, that Seydou Keïta received me:  “You travelled all those kilometers for this?”  Retired since 1977, he couldn’t imagine that thirty years after having closed his studio, one would come from far away drawn by the beauty of his photographs.  He remembered the time when he was still practicing this craft:  “It’s been a long time since I’ve been done with that, but, you can see, I really love photography, all my archives are here, in this blue trunk.”  Seydou appeared to me like a reserved, quiet, serious man, but, also, thoughtful, respectful and appreciative.  I spent whole days examining, one by one, the thousands of negatives accumulated since the opening of his studio in 1948 until 1962, when he became the official photographer for the first Malian socialist government.  The majority of negatives that I found that autumn of 1991 were in 13 x 18 cm format, but there were also numerous 9 X 13 cm formats and a few glass plates. […]