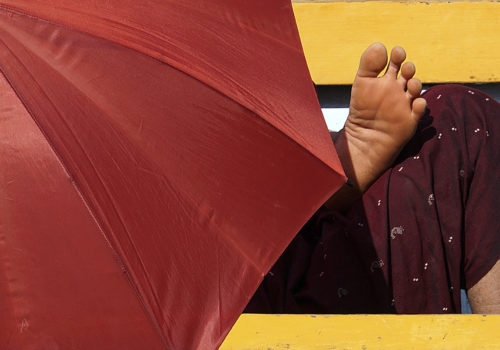 Saro di Bartolo is one of the great current reporters who best illustrates the immersion in a human space, in an ethnic group, in an economic or social organisation. He knows how to extract, through his images, the quintessence of a community in its environment. The emotions felt have nothing to do with a kind of compassion, nor of misery, his subjects do not beg any pity whatsoever. No, none of that; the subject and the photographer link together to show us Life, in all its various aspects, even if sometimes a reader from the other side of the world is taken aback. Saro delivers us real images, without embellishment, and with great respect for his subjects who are not here to assert a photographic impotence in search of a media aura.

During this forced long period which left our suitcases and our holdalls at rest, Saro – like a lot of us – has put some order in his archives. An object has been invited itself regularly in all his works since the 1980s and in all the latitudes where his cameras have been able to testify. This utensil is the “umbrella”. If we find a trace of this object, originally intended for protection from the sun, more than a millennium BC among the Chinese, the Mesopotamians and the Egyptians had also adopted it. This increasingly sophisticated accessory is certainly one of the most useful for a large part of humanity; but, it is often the most problematic because too big or too small it is essential or cumbersome when it is useless, not forgetting that despite its size it is capable of being forgotten in the most unusual places.

This simple common thread chosen by Saro di Bartolo to build a new approach to some of his works seemed very judicious to me as soon as he told me about it. The photographic presence of this object in the images magnifies the message, it gives an expression to an image which in its absence would be disconcertingly banal. Thus, even in documentary reporting, the accessory when it remains natural becomes essential to the delivery of the original message. I let you discover it with the images of Saro.