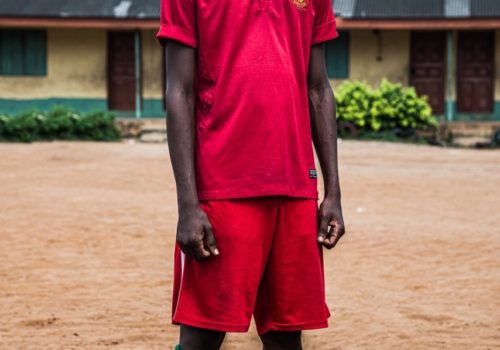 Known for his stark black and white Nigerian Identity portraits, Mfon’s Footballers in color displays his expert range in the photography medium. Mfon was born and raised in Lagos, Nigeria and is currently based throughout multiple cities in the United States. His body of photography serves as cultural and social commentary of the worlds around him.

Vice commissioned Mfon to capture the Nigerian obsession with European football clubs, evident in uniform street style with seemingly every passerby donning the kits of their chosen club. From the project, Footballers brings to light a passion for the sport which forges a camaraderie among people from all levels of Nigerian society. Mfon’s Footballers are individually photographed, but as a portfolio are united to showcase a deep love for football which is most often expressed through support for European football clubs. While Nigeria’s national team – the Super Eagles – is universally loved by Nigeirans at home and in the diaspora, Nigerian football clubs garner only a fraction of followership when compared to the cult following of overseas leagues.

Mfon’s subjects wear their club shirts with honor, often gesturing with excitement to the attire or posing shoulders back with pride. Each stands with an air of regality, as if they bear the support and community of the club behind them. While some individuals are simply lovers of the sport and collect shirts from a variety of clubs, most are dedicated to a singular Football club to a tribal and religious degree. The emotional connection to one’s chosen club is quite visceral and both victories and defeats are felt with the same intensity. The interest in foreign football clubs, especially within the Premier League, surpasses fanfare, it forms a distinct identity with those that support the same team.

The question remains, if Nigerians are so fervently captivated by the sport, why is there limited support towards the Nigerian football leagues despite an immensely popular national team? Nigerian politicians and celebrities display their public support of their favorite foreign clubs, and mass coverage of games takes over television, radio and pop culture. While lack of funding and chaotic organization within the national league is evident, the preexisting Institution of the European leagues take on a superhuman manifestation of order and success for their fanbase that is unmatched for Nigerians.

In current events, top clubs of Europe seeking to market off of their godlike reputation just recently failed to form the proposed “European Super League”, with Chelsea and Manchester United pulling out not forty-eight hours after announcing the new multibillion dollar League and many clubs following close behind. The “Super League” faced immense criticism by breaking up the ritualistic formation of the preexisting leagues. The destruction of the Super League further serves to highlight that for its viewers, football is not so much of a sport as it is a religion.