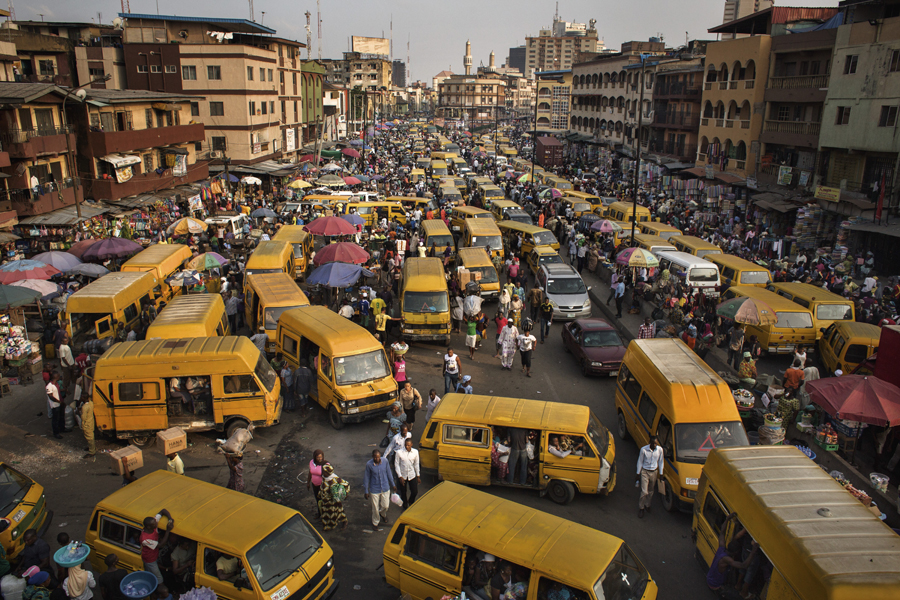 In 2013, Robin Hammond received the W. Eugene Smith Grant in Humanistic Photography for his project Condemned—Mental Health in African Countries in Crisis. The fruit of several years’ work, the report offers an unsettling account of the state of mental healthcare in several African states, from South Sudan and Somalia to Nigeria. Wherever you look, you find evidence of assaults on the dignity of patients who are abandoned, mistreated, and humiliated  in  time of crisis. “A lot of the projects I have worked on in Africa are heavy and sad, and I became concerned by the idea of how we often talk about Africa in a negative way. It’s very important that we cover issues like mental health, but I really felt that I wanted to show a different side,” explained Robin Hammond.

Awed by the somewhat chaotic effervescence of the Nigerian capital, Robin Hammond decided to stay there longer to document its complexity. Lagos is often spoken of as a city undergoing an economic boom, but that’s only part of the picture. The daily reality we discover in Robin Hammond latest book, My Lagos, tells a different story, even if scattered throughout the book are inhabitants’ testimonies affirming that “Lagos is a land of opportunity.” “People are speaking from their point of view. Even though they are really in a difficult situation, they know that there are wealthy people in Lagos and dream about it when they arrive in Lagos. But it’s a difficult place to live, unless you are prepared to work and strive very hard,” commented Hammond.

“The first time I was in Lagos was for a week-end,” said Hammond, “and it’s only when I spent more time there that I understood it a bit deeper. Part of the reason why I went there was to embrace diversity, but I wanted to make pictures which somehow captured the essence of the city. In reality, I think it’s an impossible task. A city is only  geography. what counts  is the way you experience it.” The aesthetics adopted by the photographer reflects the capital’s heterogeneity. Among posed portraits and street shots, we encounter fashion connoisseurs, the poor, farmers driven to the city by rural exodus, next to people loaded with nairas” local money”. “There is a huge diversity within this mess of a city, and I thought of it as a place showing Africa as a complex place,” Hammond further explained.

Everyone has a place, featured on full page against the background of everyday activity or in snippets like cinematic annotations in the form of Polaroid portraits. “The portraits allow us to meet the individuals that are making this city,” observed the photographer. Through their reduced size and vertical layout, these portraits break up the flow of the book and embody a character in this slightly disjointed film we know as reality. The book’s cover, featuring an original Nollywood film poster, supports this reading of the portraits. “I was really interested in Nollywood, which is very popular all over Africa. I was particularly fascinated by the imagery, concluded Hammond. The post-prod is quite amateur and I really felt it’s very much a Nigerian way of looking at the world, in which content is the most important.”

Laurence Cornet is a journalist specializing in photography and an independent curator based in New York.